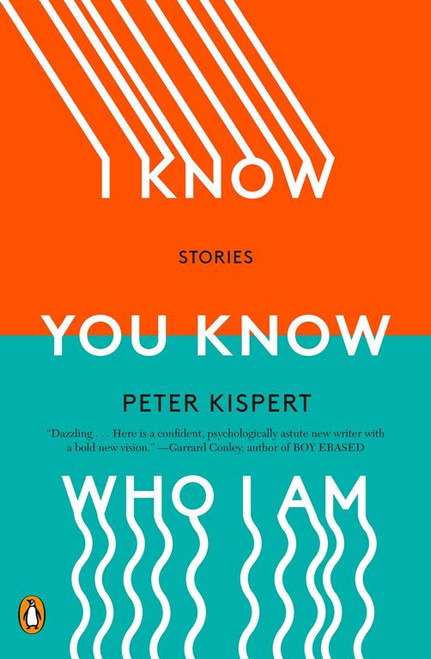 In I Know You Know Who I Am, Peter Kispert deftly explores deception and performance, the uneasiness of reconciling a queer identity with the wider world, and creates a sympathetic, often darkly humorous, portrait of characters searching for paths to intimacy.

Throughout this striking debut collection we meet characters who have lied, who have sometimes created elaborate falsehoods, and who now must cope with the way that those deceptions eat at the very fabric of their lives and relationships. In the title story, the narrator, desperate to save a love affair on the rocks, hires an actor to play a friend he invented in order to seem less lonely, after his boyfriend catches on to his compulsion for lying and demands to know this friend is real; in "Aim for the Heart," a man's lies about a hunting habit leave him with an unexpected deer carcass and the need to parse unsettling high school memories; in "Rorschach," a theater producer runs a show in which death row inmates are crucified in an on-stage rendering of the New Testament, while being haunted daily by an unrequited love and nightly by ghosts of his own creation.

"This debut collection has a wisdom and a tapestry of language far beyond the author's years. Loosely linked unreliable narrators remind us that we might find religion in the most unlikely places — such as the space between a truth and a lie.”—Jodi Picoult, #1 New York Times bestselling author of A Spark of Light and Small Great Things

"Kispert's stories have remarkable range, but are all anchored by lithe and lucid prose compelling the reader to become complicit in these very human dramas.”
— OprahMag.com

"Striking… [I Know You Know Who I Am is] about the how one slips into dishonesty in relationships and in coming to terms with oneself, the stories reveal through these lies, the truth about us all." — Salon

"Lashed by years and bound by love, the liars in this incredible debut punish themselves as their compulsions and betrayals tremble across time. Cut crosswise, their lives show these pathologies at work, just as hard and irradiating, superheated and sad, as the prose in which they’re rendered. Above all, it is Kispert’s immense talent that we come to understand, and even love, who they are." —Patrick Nathan, author of Some Hell

"A darkly hilarious, astute collection that comes to us at the perfect time, where the truth and intimacy feel more elusive than ever." —John Paul Brammer, creator of the advice column ¡Hola Papi!