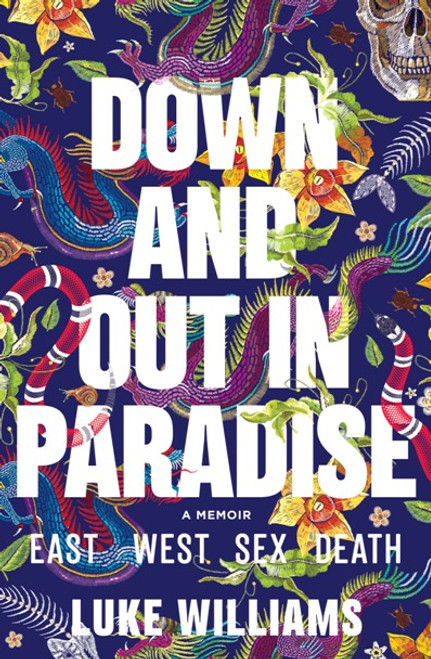 Luke Williams flies to Kuala Lumpur coming down off crystal meth without plans or much cash. He is in Asia for three years. He spends time working as a prostitute in Pattaya, eats snake heart in Vietnam, consults an American medium in Ubud, and explores the eye-popping red light scenes in Jakarta and the Philippines. Along the way, he encounters other Westerners who go to Asia for the things they can’t find at home – riches, wives, ladyboys, cheap living and even cheaper drugs, cults, spices, mountains, tropical beaches, beach gigolos, ‘self-esteem’ necklaces, and ascended masters.

Luke fully immerses himself in every environment and encounter, going far beyond reportage, while aspects of his own history – his dreams, disappointments, urges, and his inherited struggle with mental illness – begin to catch up with him. He becomes addicted to Valium, is haunted by the past, and ends up in jail. Ultimately, Luke is confronted by what is and what was, and his own footprint upon it all.

"Luke Williams will be known to some readers from his previous book The Ice Age. A freelance journalist and former drug addict, he was researching addiction to crystal meth for a story, only to become seduced by the drug himself. In this new book, Luke tries to make a fresh start in Asia - though he is coming down off crystal meth on his flight out of Australia! Scraping by with very little money, he ends up in Bangkok at the Cake, the cheapest hostel in town at $4 a night. From there he heads to Pattaya, the sex capital of the world, as it is a good prospect to write a story he can sell. The bar and sex scene is at least six times bigger than the famous area in Amsterdam. The gay area, Boyztown is an L shaped alley with a dozen open air venues on each side. He documents his time in Pattaya, the bar boys and their admirers, the madams, and the people he encounters. He is even drawn to dabble in a little sex work himself, as money is always very tight. But insider opinions on Pattaya vary wildly - one bar boy tells Luke that Pattaya is ‘a paradise’ for him - that he makes so much money, he loves his job, and he meets many people. Another tells him that he only gets one day off a month, he sees his family in Chiang Mai only once a year and gives them almost everything he earns, and that the men he has to have sex with disgust him - ‘all I ever do it smell old man’s breath’. Luke’s stays in various places have a tendency to end abruptly - he gets into trouble for stealing or some other transgression and has to get out of town pronto. Although towards the end of the book, there is a sense of personal growth and spiritual awakening. Whatever you might think of his choices and the situations he ends up in, there is no denying that he is a gifted writer and this book will be an eye-opener for many readers. Luke Williams goes to places many wouldn’t - from straight brothels in Jakarta to Gili T, an infamous drug island in Indonesia. But in addition to his extreme personal experiences, the book is also grounded in solid journalistic research about the places he visits. This is a travel narrative like no other and one that gay readers in particular will find fascinating."

Drag : Combing Through the Big Wigs of Show Business

Double Melancholy : Art, Beauty, and the Making of a Brown Queer Man