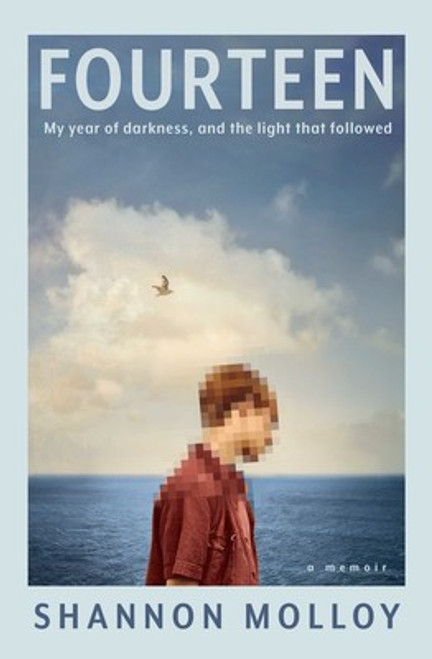 Fourteen is this generation’s Holding the Man – a moving coming-of-age memoir about a young man’s search for identity and acceptance in the most unforgiving and hostile of places: high school.

And it was a year that almost ended tragically.

I found solace in writing and my budding journalism; in a close-knit group of friends, all growing up too quickly together; and in the fierce protection of family and a mother’s unconditional love. These were moments of light and hilarity that kept me going.

As much as Fourteen is a chronicle of the enormous struggle and adversity I endured, and the shocking consequences of it all, it’s also a tale of survival.

Because I did survive.

Recommended and Reviewed by Graeme Aitken:

"This new Australian memoir will certainly resonate with anyone who experienced bullying over their perceived difference during their high school years. In author Shannon Molloy’s case, he was persecuted for appearing ‘gay’ and his experiences are likely to be very universal for many gay men. The book follows one year in his life during the 1990s when he was aged fourteen, in his home town of Yeppoon, on the central Queensland coast, close to Rockhampton. The main entertainment for him and his posse of girlfriends was ‘doing laps of Keppel Bay Plaza ... despite the unexciting roster of retailers.’ Although it was his classmates and peers who tormented Shannon relentlessly at school, some of his teachers also failed in their duty of care to protect him or to reprimand behaviour that was abusive. The woodwork teacher, Mr Nelson, even participated, reading aloud to a classroom of braying boys a long and sexually graphic letter that someone has composed to the football captain and signed as being from Shannon. The recitation went on for minutes and was so intensely mortifying to Shannon that it led to a suicide attempt. Meanwhile the history teacher failed to reprimand a pupil who recounted a story about the meaning of the word faggots and how Hitler ‘tied the fags up like bundles of sticks and then burnt ‘em alive in a big fire pit’. This anecdote provoked an enormous outburst of hilarity which the teacher failed to moderate or correct. Even the principal Mrs Cunningham made the misguided decision to appoint Jonathan, the most overtly effeminate boy at the school, as Shannon’s mentor. Poor Jonathan was relentlessly taunted and was also a boarder, so had to live with it, 24-hours a day - yet Jonathan ‘did not remotely give a shit ... about the onslaught of abuse he had to endure each day’. But this highly visible pairing only increased the abuse for Shannon and ‘Jonathan became the new friend I desperately did not want. His presence felt like a cold sore - unpleasant, very conspicuous and something you just have to ride out.’ Thankfully, amongst this onslaught of verbal and physical abuse, Shannon also had some friends and protectors. His mother, a hairdresser, was his unconditional supporter. His older brother Brett and his gang of mates became Shannon’s unofficial bodyguards at school’s morning tea and lunch breaks. And he also had a pack of loyal girlfriends to hang out with at the mall, practise dance routines with, and go to teenage parties. And the book builds to a happy ending with Shannon’s desire to escape his situation by becoming an overseas exchange student. Despite their financial constraints, his parents manage to enable the exchange and it is elsewhere, in Connecticut, America, that Shannon’s temporary ‘Mom’, helps to shepherd him through his new gay identity. Shannon Molloy has made a career as a journalist over the past decade and so this memoir is very well-written and highly readable. Despite the  many grim episodes that are recounted, there are also humorous and entertaining moments that help to offset that. Shannon’s ironic eye for depicting the limitations of small town life is amusing, while he has an impressive recollection of late-1990s pop culture. This important book will have special resonance for gay men and other LBTIQ+ people, but also for anyone who went through high school and was branded as ‘different’ and subsequently harrassed because of it."

"Fourteen is the factual account of one year in the life of a gay high-schooler in the small central Queensland town of Yeppoon. Journalist Shannon Molloy uses clear, concise language that makes his memoir easy to read, but also allows for both moments of levity and scenes that pack a heart-rending punch. Anyone who was a teen in the late 90s will enjoy reminiscing about early internet chat rooms, Smash Hits magazine, ‘Mambo Number Five’ and drinking casks of Fruity Lexia and inflating them to use as a pillow. But what really hits hard in Molloy’s memoir is the cruelty and violence perpetuated by fellow students and some teachers. The blatant homophobia in Yeppoon is shocking. Molloy is bullied and othered in a way that, considering the steps that have been taken towards equality, seems appalling compared to the present. Thankfully for Molloy, who went on to become a successful entertainment reporter in Sydney, it does indeed get better. For adults and older teenage readers Fourteen might serve as a tear-jerking but ultimately optimistic view of how things can change, both personally and in a broader societal sense." Books + Publishing

‘I love this book … a beautifully written account of a young man struggling with his sexuality, overcoming shocking abuse and finding his way to pride.’ Peter FitzSimons, bestselling author

‘Shannon is unflinching in recounting the horror, but he is also funny, empathetic and, above all, full of courage.’ Bridie Jabour, author of The Way Things Should Be

‘A slice of life as experienced quite recently in the “lucky country”.’ The Hon Michael Kirby, AC CMG