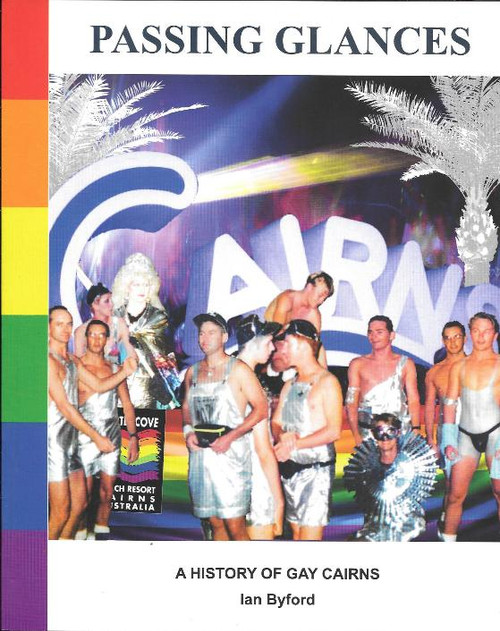 From the establishment of Cairns in 1876 until gay law reform in 1990, the gay history of Cairns consisted of the criminal records of those convicted of 'unnatural offences.' Gays hid for fear of draconian laws which threatened 14 years jail with hard labour for homosexual acts between consenting adult males in private. But the lack of records does not indicate a lack of history or of homosexuals. Ian Byford has spent over a decade researching the hidden history of Gay Cairns.

In ''Passing Glances: A History of Gay Cairns'' he has compiled a unique record of homosexual life in an isolated regional town. The book encompasses scandals like the one that rocked the Cairns upper crust in 1905, starting with the son-in-law of frequent mayor Louis Severin charged with the brutal murder of a wealthy elderly bachelor, and ending with Inspector Durham, Officer in charge of Cairns Police paying the ultimate price because he could not keep his hands off Constable Cox. He recalls The Gold Digger's Club organising clandestine gay outings to an isolated beach past Yarrabah in the 1960's, and Millar's Restaurant opposite the Captain Cook statue, which for a decade in the 1970's and 1980's provided a hidden social sanctuary for local gays.

''Passing Glances'' also looks at the struggle to achieve Gay Law Reform. It tells the story of Ted Kelk, living a determinedly closeted life as a teacher at Parramatta State School. However when faced with his own mortality, Ted Kelk, with only a few years to live, burst out of the closet, railing against the authorities, chaining himself up out the front of the Cairns Post, alienating even gays who thought he aimed for too much, too soon, but living just long enough to see the Goss Government pass the Gay Law reform for which he had been chief antagonist.

In large format ((21cm by 26cm) and richly illustrated with colour photographs, reproductions of pamphlets and other resources, Ian's book provides a rare resource for both those who remember those years and those yet to discover the rich hidden history of a town the author obviously loves.

Ian Byford came to Australia after University and discovered Cairns while working as an agricultural scientist, then retired there in the mid 1990's, immersing himself in the local Arts scene and gay community work. In 2002 he began the work of researching and compiling this history with the late Rex Masters. He has the benefit of having known or met many of the people who figure in the book. By mere coincidence, as a volunteer with QuAC in Brisbane, he cared for the dying Ted Kelk.