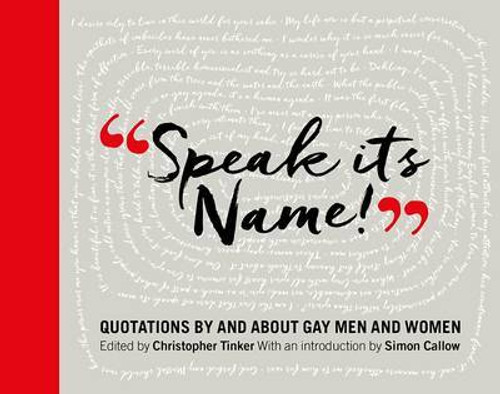 This collection of quotations by and about gay people is a celebration of the advances in LGBT rights in the UK over the last half-century and a demonstration of the battle against oppression and prejudice that led to them. A diverse range of people from the worlds of entertainment, sport, fashion, business, science, politics and the arts share their thoughts on coming out, equality, homophobia, love, sex, promiscuity, fidelity, bullying, labels and marriage. Amusing observations by Noel Coward, Tallulah Bankhead, Quentin Crisp, Boy George and Ian McKellen are interspersed with extracts from revealing interviews with Dusty Springfield, Alan Bennett, Freddie Mercury, Clive Barker, George Michael and William S. Burroughs and diary entries by Kenneth Williams, Joe Orton, W. H. Auden and John Maynard Keynes. John Gielgud and Alan Turing's disturbing accounts of their arrests at a time when homosexual acts were punishable with a prison sentence contrast with touching love-letters from Violet Trefusis to her lover Vita Sackville-West, King James I to his favourite, George Villiers, Marquis of Buckingham, and between Benjamin Britten and his partner Peter Pears.
Contributions by Oscar Wilde, Lord Montagu of Beaulieu, John Wolfenden, Field Marshal Montgomery, Lord Arran, Margaret Thatcher, Waheed Alli and David Cameron demonstrate the enormous developments in gay rights in Britain in recent decades. Also included are the reflections of Julie Andrews, Elizabeth Taylor, Liza Minnelli, Madonna, Eartha Kitt, Grace Jones, Joan Collins and other 'gay icons' - that select group of individuals who, regardless of their sexuality, LGBT people have taken to their hearts.

Service with a Smirk : At Your Service #2