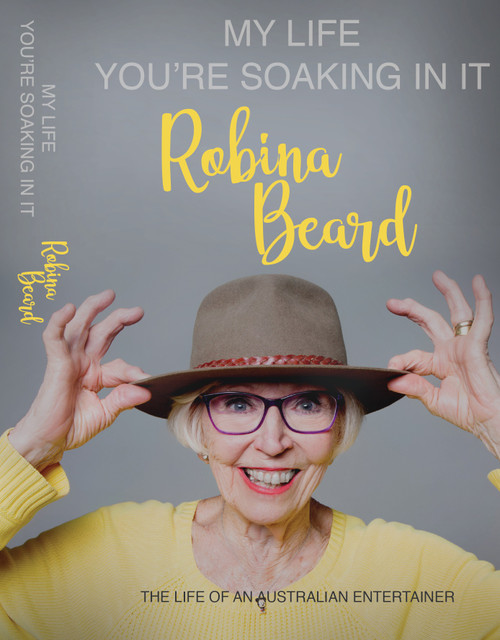 She became an Australian household name in 1968, when she graced our screens as Madge the Manicurist in a television commercial for Palmolive Dishwashing Liquid, when Colgate Palmolive was changing the way Aussies did their dishes. These advertisements ran for 20 years. But now Robina Beard is making another name for herself as she launches her memoir, ‘My Life: You’re Soaking In It.’

‘My Life: You’re Soaking In It.’ documents Robina’s remarkable life in show business; from her time as a dancer, to a television comedy actress (and weather girl) and on to become a theatre choreographer and director. Robina’s passion for musical theatre took her to Canada to tour the revue, Spring Thaw for six months.

She was no stranger to the small screen either, with her charismatic, comedic persona enchanting audiences across the country. Robina would appear in the iconic Number 96, G.P., Gotcha, Going Home, Kingswood Country, All Saints and most recently she played the grandmother in ABC’s groundbreaking comedy series, ‘A Moody Christmas’.

Her commitment to Australian theatre continues and in 2011 she received an OAM for ‘Services to the Theatre, particularly in Dance’ for her exceptional contribution to her profession for over 65 years.

My Life: You’re Soaking In It will take you on an adventure through the rich and unfinished life of Robina Beard. Her love of family, her zest for life and her dedication to the arts makes for a truly inspiring personal account from one of Australia’s most popular and talented performers.

The Secrets Of My Life (Paperback)

The Secrets of My Life

Out Loud: A Memoir