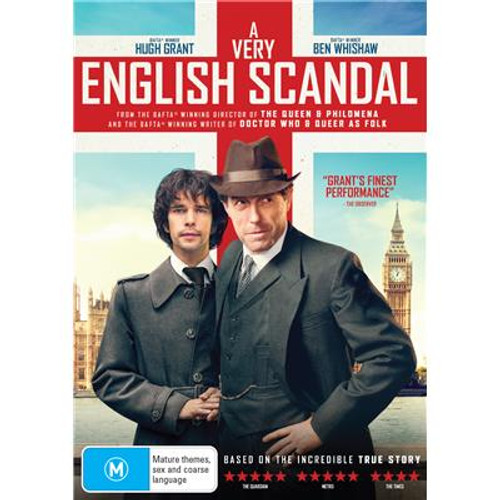 A Very English Scandal is the shocking (but also very funny) true story of the first British politician to stand trial for conspiracy to murder. It's the late 1960s, homosexuality has only just been decriminalized, and Jeremy Thorpe, the leader of the Liberal party and the youngest leader of any British political party in a hundred years, has a secret he's desperate to hide. As long as Norman Scott, his vociferous ex-lover is around, Thorpe's brilliant career is at risk, and eventually Thorpe can see only one way to silence Scott for good. The trial of Jeremy Thorpe changed politics forever as the British public discovered the darkest secrets of the Establishment and the lengths they'd go to conceal them.

"A Very English Scandal" is a dazzling three hours and in pace and potency puts "The Crown" to shame." New York Times

"There is an eccentric bit of electricity that runs through A Very English Scandal, one of the tightest and brightest and most sublime miniseries that you're likely to see on television in 2018." - Hollywood Reporter

Subtitles - English for the hearing impaired

Notes On A Scandal

A Very English Scandal : Sex, Lies and a Murder Plot at the Heart of the Establishment (TV series tie-in edition)

Notes on a Scandal DVD