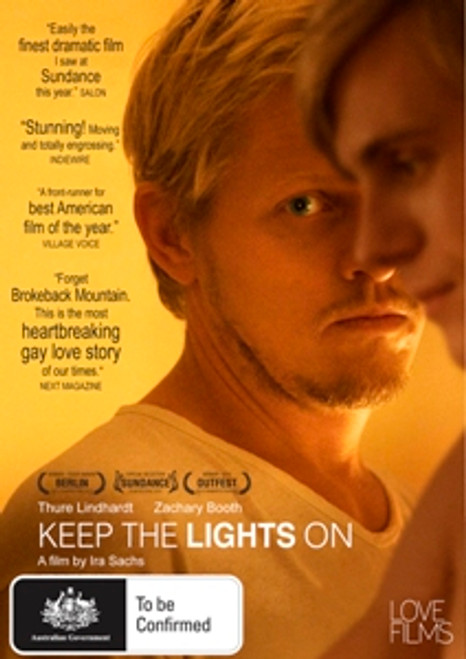 Keep the Lights On chronicles  the emotionally and sexually charged  relationship of two men in New York City through love, friendship, and addiction. Documentary filmmaker Erik (Thure Lindhardt) and closeted lawyer Paul (Zachary Booth) meet through a casual encounter, but soon find a deeper connection and become a couple. Individually and together, they are risk takers - compulsive, and fueled by drugs and sex. In an almost decade-long relationship defined by highs, lows, and dysfunctional patterns, Erik struggles to negotiate his own boundaries and dignity while being true to himself.

Director Ira Sachs' fearlessly personal screenplay is based on his own experiences of being in a relationship with author Bill Clegg, who  has captured  the story of his own addiction in two  memoirs. The film is  anchored by Lindhardt's performance (he is  also in the Danish film about gay neo-Nazis, Brotherhood), who embodies Erik's isolation and vulnerability with a gentle presence, while Booth (from the tv series Damages) is seductively self-destructive and yet sympathetic. Harrowing and romantic, visceral and layered, Keep the Lights On is a film that looks at love and all of its manifestations, taking it to dark depths and bringing it back to a place of grace.

This film has won awards and generated  rave reviews  at film festivals the world over (including Sundance and  the Berlin International), and the director has since gone on to make the celebrated Love is Strange.

Also check out the Video Trailer below under Product Videos