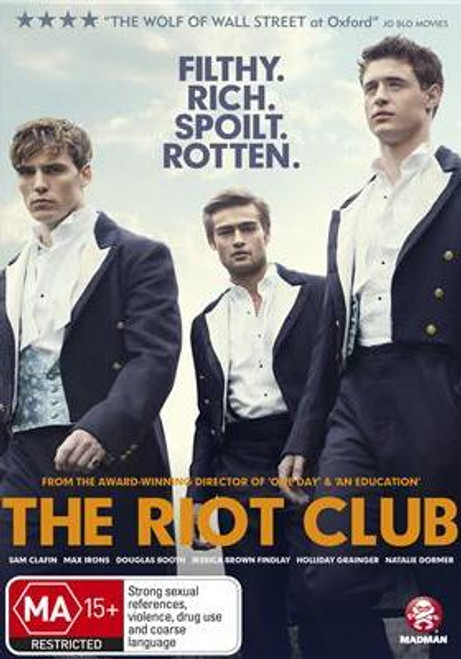 At Oxford University the hottest invitation is to join The Riot Club, a privileged and exclusive club, the members of which hold the keys to future success and power. First year students Miles and Alistair are both dazzlingly clever and offspring of pillars of the Establishment, though politically and socially polar opposites. Alistair (Sam Clafin), pressured by a family legacy of social success, is ruthlessly determined to succeed; Miles (Max Irons), however, has been seduced by the social kudos of the invitation, but his heart isn't in it. Nonetheless, both young men are invited by the club's leaders to a debauched night out to see if they've got what it takes to belong. Over the course of the evening, the tinderbox of personal rivalries and jealousy is set alight by alcohol and hormones, until it finally and catastrophically explodes, forcing the wolf pack to turn on one of its own.

Loosely inspired by Oxford University's own real-life Bullingdon Club, an exclusive and infamous group of students which once had Boris Johnson and ex British PM David Cameron as members, this is an excoriating look at moral corruption, depravity, elitism, and the abuses of power and money in society. Apart from its young and attractive cast, it also stars Australian actor Sam Reid as Hugo, the poet and gay member of the group, who has an interest in Miles.

Adapted by screenwriter Laura Wade from her critically-acclaimed play, ''Posh'', and directed by Lone Scherfig, who also made ''One Day'', and ''An Education''.