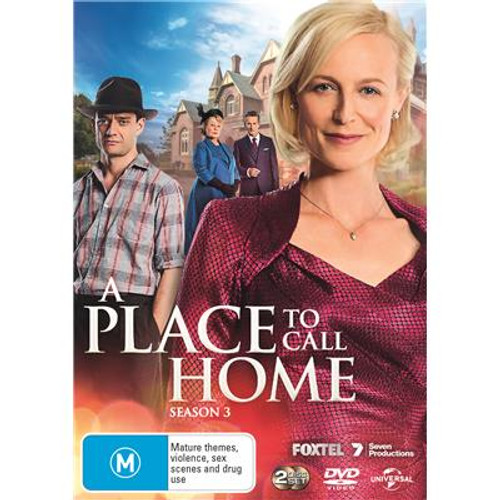 A mysterious woman is perched between the harsh legacy of World War II and the hope of a new life in Australia.

In Season Three of "A Place to Call Home": as Australia faces internal and external threats to its way of life so too do the people of Inverness, and previous alliances and relationships are tested. Sarah's dilemma, between her feelings for George and her duty to her husband Rene, is exacerbated by a heartbreaking secret. James and Olivia's relationship is under pressure when the true parentage of baby George is threatened with exposure. Elizabeth Bligh's decision to leave Ash Park to explore a life of her own proves more difficult than she thought. Anna and Gino face the difference between the fairytale romance and the reality of married life. Independent lovers Carolyn and Jack try to move closer to a commitment. Through it all, Regina's manipulative behaviour weaves an impenetrable web around George. In the sleepy village of Inverness, sex, death and secrets are never far below the surface.

This set contains 3 DVDs including all 10 episodes of Season 3, and the New Ending o the Season 2 Finale

A Jihad for Love DVD