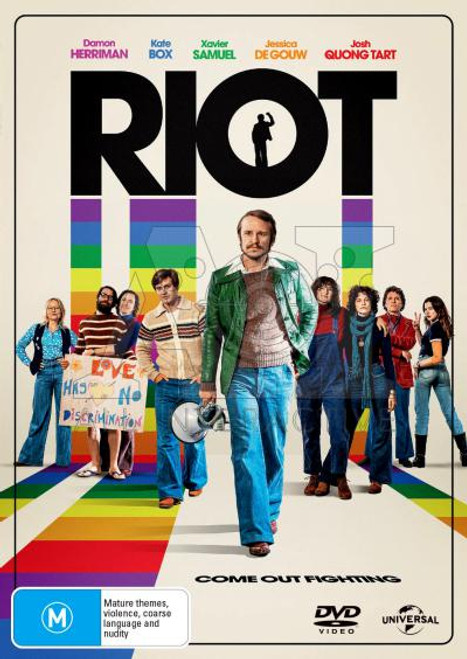 Starring an outstanding line up of Australian talent, headlined by Damon Herriman, Kate Box, Xavier Samuel and Jessica de Gouw, Riot shines a spotlight on Australia’s 1970s Gay Rights Movement and the passionate individuals who were unwavering in their fight for decriminalisation, recognition and equality.

Based on real people and real events, Riot is a powerful and moving telemovie reflecting an important chapter in Australia’s LGBTQ history. It explores the origins of the activism that led to Australia’s most famous street parade.

Lance Gowland (Damon Herriman) is a devoted activist, steadfast and dedicated to actively fighting for his beliefs while juggling family, work and relationships. With the system against them and ever-present adversity, including police brutality, legislative persecution, social shunning, job dismissal and general violence, Gowland and his fellow activists decide to come out fighting in their celebration of diversity.

Over the years, their resolve is tested, and by 1978, when the push to decriminalize homosexuality has seemingly stalled, they decide on a new tactic of a celebratory street event in hopes of garnering wider public support.

Securing a permit for a legal protest, on the evening of June 24, in recognition of Gay Solidarity Day, a small but passionate group collect behind a truck driven by Lance, to stage a street party and joyfully declare their pride.  The night will be marked by great violence, but the ramifications will pave the way for equality, and the establishment of a world-renowned parade that continues to celebrate the spirit of these brave, pioneering men and women.