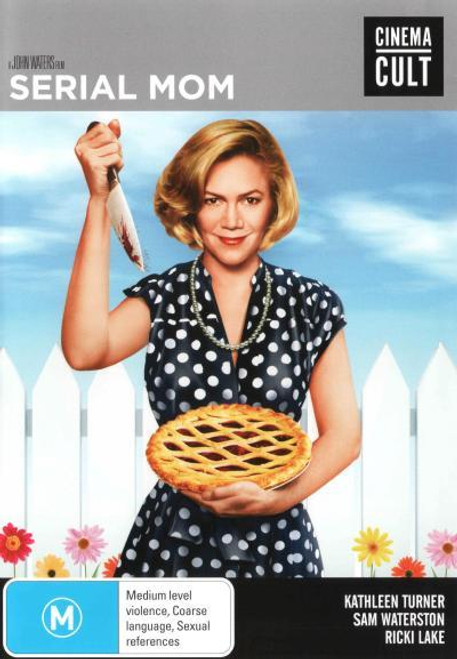 In ''Serial Mom'', cult director John Waters creates a wickedly funny black comedy about a Baltimore housewife who seems the perfect homemaker, but is in fact a serial killer who bumps off anyone who fails to live up to her twisted moral code.

Beverly Sutphin (Kathleen Turner) is the ultimate suburbanite - she listens to Barry Manilow and recycles, but is so obsessed with domestic perfection that she kills a neighbour for not separating her recyclables. Her hubby (played by Sam Waterston) and kids (played by Matthew Lillard and Ricki Lake) don't have a clue that in fact it is squeaky-clean mom who is the killer at large in their neighbourhood and who has murdered, among others, the guy who dumped her daughter. Featuring a sly cameo by Patty Hearst (yes, that Patty Hearst), John Waters' fans will rejoice that this classic poking fun at American family values and attitudes to celebrity is available again on dvd!

Click on ''Product Videos'' below to see the Trailer for this series.