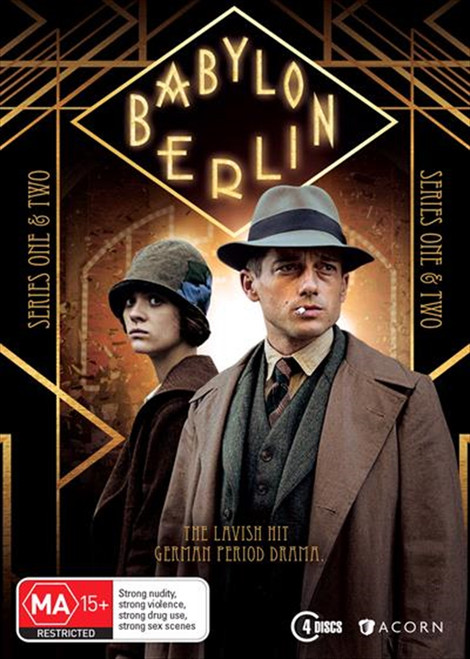 From economy to culture, politics to the underworld - everything is in the grip of radical change. Speculation and inflation are already tearing away at the foundations of the still young Weimar Republic. Growing poverty and unemployment stand in stark contrast to the excesses and indulgence of the city's night life and its overflowing creative energy. Based on the best-selling novels by Volker Kutscher, BABYLON BERLIN is the first German TV Series where viewers can emotionally experience the story of the political developments leading from the Weimar Republic to the spread of National Socialism. Through the eyes of Gereon Rath, the young police inspector from Cologne, we get a glimpse behind the scenes of the "Roaring Twenties" which not only brought the Great Depression but where "dancing on the volcano" became the stuff of legend.

"This lavish production - the most expensive German-language production ever - has plenty of appeal for the gay male viewer. The main characters are all straight but very physically appealing, and there is plenty of nudity and sex scenes. There is some secondary gay content and the setting during the decadent days of the Weimar Republic has always had a strong fascination and appeal to gay men. Although Hitler is only mentioned once in 16 episodes, there is a sense of foreboding at what is to come. Fans of crime and suspense are going to lap this up and the drug-addicted police inspector Gideon Rath is a very appealing lead character in the tradition of flawed crime-solvers. He is ably assisted by Charlotte Ritter, who sees working with him, as a chance to escape her poverty stricken living situation and the sex work she's been forced to turn to. Though she quickly reveals a great aptitude for police work. With 16 episodes to binge, this is top-notch absorbing entertainment."