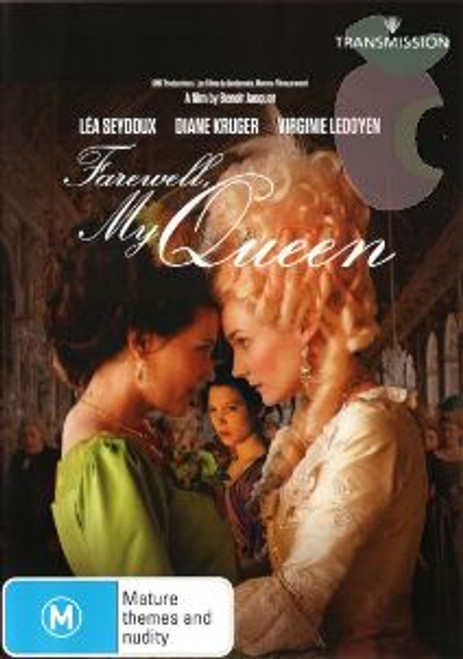 This ravishingly beautiful depiction of the last days of Marie Antoinette (filmed on location at the Palace of Versailles) features a fascinating point of view - the young girl who is reader to the Queen, and who is utterly devoted, and in love with her!

Sidonie Laborde reads books to the Queen and is summoned at all hours of night and day to respond to Marie Antoinette's whims. Sidonie, a naive young girl, has a crush on the Queen, and while she relishes the opportunities for intimacy with her, she is emotionally hurt by the fact that her majesty is besotted with The Duchess de Polignac (a relationship which is not even implied, but made quite overt). There is a telling scene where Sidonie enters the chamber of the sleeping Duchess and examines the nude woman, as if trying to understand the charm and fascination she holds for the Queen.

When news arrives that the Bastille Prison has just been stormed by the people of Paris, there are the first inklings that the very existence of the monarchy is on the precipice. As the nobles and servants of Versailles begin to realize that their carefully shut off existence is coming to an end, they scramble to figure out a way to survive. Sidonie is asked by the Queen to serve as a decoy by dressing up as the Duchess and leaving the palace in a lavish carriage, thus allowing both Queen and her lover to escape safely. Will Sidonie's sense of duty and love overcome her sense of self-preservation? Lea Seydoux (co-winner of the 2013 best actress award at Cannes for her role in the sexually explicit lesbian love story, Blue is the Warmest Color) delivers a stunningly nuanced performance as the conflicted Sidonie, while the gorgeous actresses Diane Kruger and Virginie Ledoyen play Marie Antoinette and the Duchess.