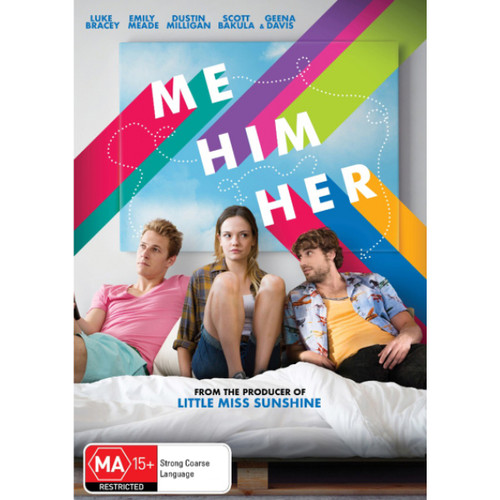 In this madcap romantic comedy from the producers of ''Little Miss Sunshine'', three millennials try to figure out love, sex and friendship in Hollywood.

Brendan Ehrlick, (Aussie actor Luke Bracey from ''Home and Away'' and ''Point Break''), heartthrob star of TV's popular cop series "Hard Justice," has just realised he is gay, but isnt sure how to handle this with regard to his Hollywood career. So he comes out to his slacker best friend Cory (Dustin Milligan of ''90210'') in Florida, and enlists him to fly out to LA and help him deal with it. Upon arrival, Cory has a drunken one-night stand with Gabbi (Emily Meade of ''The Deuce") and is mostly too busy trying to see her again to help Brendan, despite the fact that Gabbi is a lesbian. With a rowdy cast rounded by Geena Davis, Scott Bakula and Haley Joel Osment, ''Me Him Her'' is zany, frothy, and heartwarming look at friendship, relationship, showmanship, sexuality and the sometimes dirty, sometimes magical underbelly of millennial life in LA.

Is It Just Me? DVD