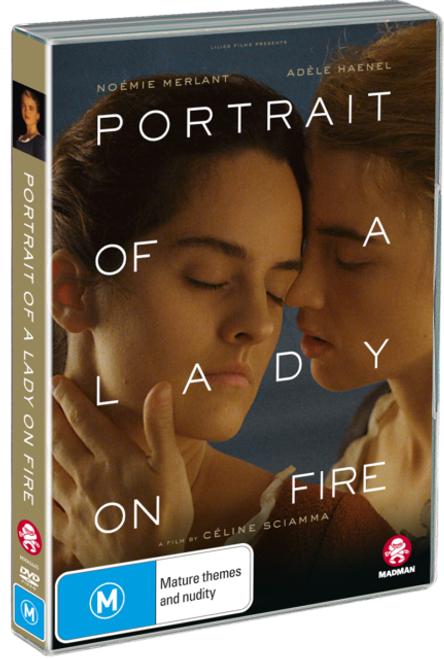 France, 1760: Passion brews quietly between an artist and her subject, until they together create a space in which it can briefly flourish, in this sumptuous eighteenth-century romance from Céline Sciamma, one of contemporary French cinema’s most acclaimed auteurs. Summoned to an isolated seaside estate on a secret assignment, Marianne (Noémie Merlant) must find a way to paint a wedding portrait of Héloïse (Adèle Haenel), who is resisting chattel marriage, by furtively observing her. What unfolds in exquisite tension is an exchange of sustained gazes in which the two women come to know each other’s gestures, expressions, and bodies with rapturous intimacy, ultimately forging a subversive creative collaboration as well as a delirious romance. Charged with a yearning that almost transcends time and space, Portrait of a Lady on Fire mines the emotional and artistic possibilities that emerge when women can freely live together and look at one another in a world without men.

Marianne is commissioned to paint the wedding portrait of Hlose, a young woman who has just left the convent. Because she is a reluctant bride-to-be, Marianne arrives under the guise of companionship, observing Hlose by day and secretly painting her by firelight at night. As the two women orbit one another, intimacy and attraction grow as they share Hlose's first moments of freedom. Hlose's portrait soon becomes a collaborative act of and testament to their love.

Pocket Positivity: RuPaul The life-affirming philosophy of a drag superstar