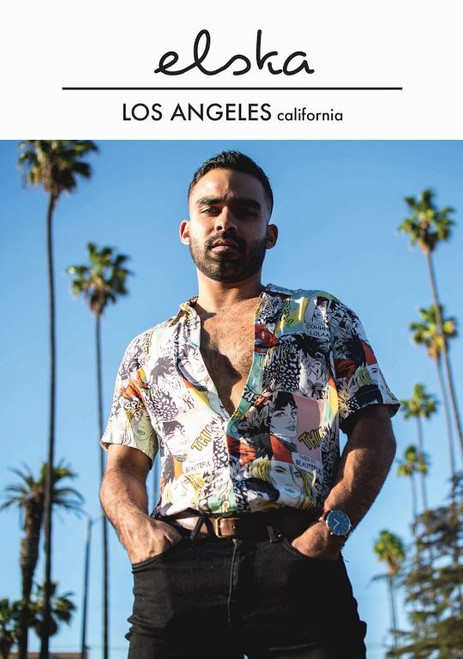 Elska Issue 18 travels to Los Angeles, California to showcase a diverse range of men from the local LGBTQ community. “We’ve had a lot of requests from readers to feature LA, but we had always resisted because we believed the negative stereotypes about the city” says Elska editor and chief photographer Liam Campbell. “We feared that the image of Angelenos as vain, self-obsessed, and body fascist would be true, making the city incompatible with a publication known for championing imperfection and different types of beauty. Fortunately, like most stereotypes, the reality was different and the men we met in LA really shared our values. We were also excited that one of the most diverse US cities yielded one of the most diverse Elska issues, furthering our aim to spotlight those less visible in our community.”

These local men were photographed in their homes and in their neighbourhoods, presented with a natural style that melds documentary portrait photography with a bit of sexiness. The lack of airbrushing or artificiality helps you get to know them as they are and to see different kinds of beauty, and the stories that accompany their pictorials, all written in their own words, get you even closer.

While Elska has become known for featuring 'everyday guys', there do happen to be a few rather well-known men here. It's only natural considering that LA is the capital of the entertainment world that some people in 'the industry' would stumble into the mix, but everyone is welcome in Elska when they bring with them a sense of honesty and positivity.

Some of the eighteen men you'll meet in Elska Los Angeles include:

Caden Gray, shot in Baldwin Hills, who wrote about his life as a musician - not the glamorous part but the day-by-day, pay-the-bills part as a schoolteacher;

Drew Droege, shot in East Hollywood, who wrote about his typical morning in a delightfully colourful stream that features musings on Barbara Bush, bitzed avocados, and burpees;

Jeremy Lucido, shot in DTLA, who wrote about the time when he brought a guy home from a bar who he really would later regret;

Dylan Rubic, shot in West Hollywood, who wrote a very LA piece about not being able to find his car (it's much more interesting than it sounds);

Tammie Brown; shot in Panorama City, who wrote about all the little battles he fought growing up, such as getting his mother to buy him a wig or getting his principal to let him go to prom in drag.