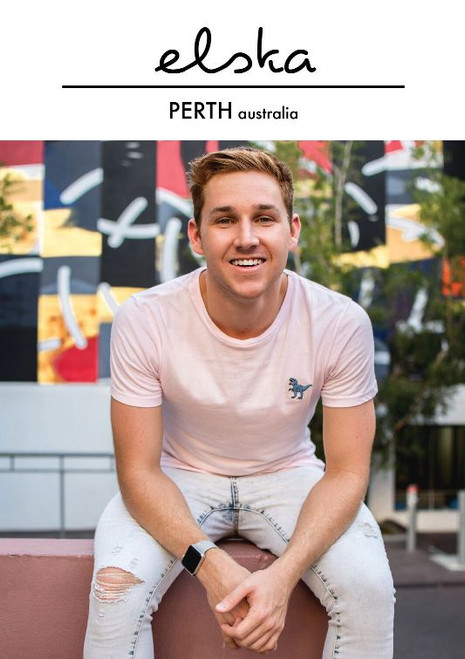 The photography style is natural and un-airbrushed, letting you see the men and their personalities as they truly are. They wear their own style of clothes, giving a peek at culture through fashion, and many of the men also are shot nude, bearing all for us with pride. There’s no ‘perfect' models and no celebrities, just regular guys you might meet at a local bar or café.

This issue, Elska visits Perth, the magazine's first Australian city! ''When seeking feedback from readers on which city to choose”, says editor and chief photographer Liam Campbell, “we received several comments from people in Sydney and Melbourne denigrating Perth as ‘the most boring city in the world’, which only made us want to choose Perth more, to see if we could prove them wrong. And in the end, it wasn’t boring at all. That’s why we did more shoots here than for any other Elska city and why this issue is our biggest yet. And Perth was also remarkable for being so full of happy people - that’s why it’s our first issue to have someone actually smiling on the cover!”

The stories written by each of the men give clues into the local culture, and more than in any other Elska issue, the Perth men wrote a lot about sex. Perhaps that’s owed to its reputation as a boring city - what better way to relieve boredom than a good shag? Or perhaps it’s just because they’re a very open, fun-loving group. But whether it’s Owey S’s account of a nude beach encounter, Dan’s chronology of a debauched weekend, or Martin A’s ode to Aussie men entitled “Man Flesh”, these stories tell you something about both the men themselves and Perth life. Of course sex isn’t the only thing up for discussion. You also get Joel K’s piece about his own heartlessness after a love gone sour; Aaron A’s story about moving on after suffering a stroke; Jordan G’s discussion on dating as a trans man; or Pär-Johan G-R’s musings about differences between Australia and his native Sweden. And there actually is one local celebrity in Elska Perth, a first for Elska, but in keeping with it's spirit, his fame is not promoted or highlighted, and his story reveals who he really is rather than taking the form of a press release. All the men in Elska are equal, all compelling, and all beautiful in their different types of ways.