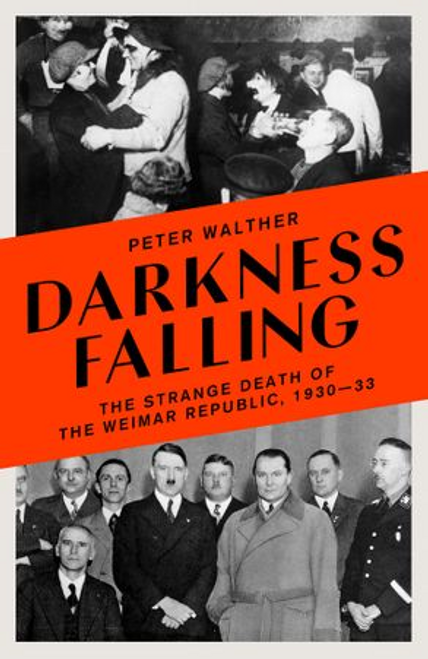 A dramatic account of Germany's slide from parliamentary democracy to dictatorship, and the history of Weimar Berlin in the three years before the Nazi takeover.

In March 1930, after the collapse of the coalition that had ruled Germany since 1928, President Hindenburg asked Heinrich Bruning, bespectacled and scholarly leader of the Catholic Centre Party, to form a government. Some three years later, in January 1933, Hindenburg appointed as chancellor the demagogic, virulently anti-Semitic leader of the National Socialist party. Within weeks, Adolf Hitler has begun the process of dismantling the flawed democracy of the Weimar Republic and replacing it with a one-party totalitarian state.

Darkness Falling depicts in compelling fashion the serial crises and mounting violence of a febrile era. Peter Walther examines the slow death of Weimar through the prism of nine colourful protagonists, including leading German politicians of right, left and centre, the clairvoyant and occultist, Erik Jan Hanussen and the formidable American journalist Dorothy Thompson. He profiles these heterogeneous characters in intriguing detail, pulling together the threads of their lives to chart the demise of German parliamentary democracy and the rise of National Socialist tyranny. Along the way we gain fascinating insights into the machinations in the corridors of power to keep the 'Bohemian corporal' from the chancellorship, and the venality of the Nazi elite and its fellow travellers from the demi-monde of early 1930s Berlin. Walther evokes the louche nightlife of the German capital – 'a playground for charlatans and prophets, madmen and crooks' – memorably and atmospherically.

A masterly fusion of meticulously researched historical writing and vividly propulsive storytelling, Darkness Falling is a distinctive and enthralling account of Germany's slide from democracy to dictatorship.

'Gripping and all too timely' -James Hawes

'History at its very best – and a fabulous translation, too' -Graham Hurley

Will She Do?: Act One of a Life on Stage

One Breath from Drowning