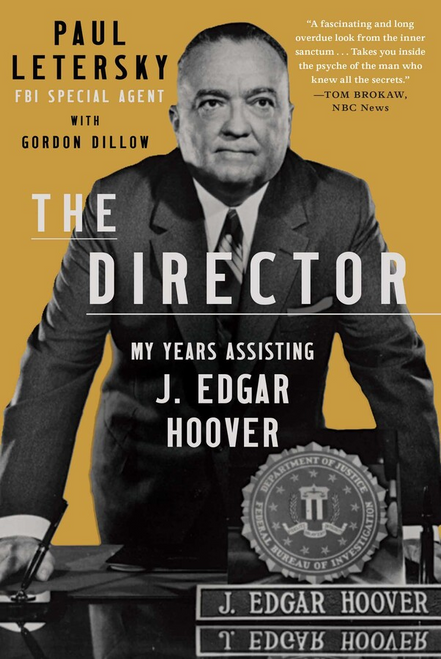 The first book ever written about FBI Director J. Edgar Hoover by a member of his personal staff—his former assistant, Paul Letersky—The Director offers unprecedented insight into an American legend.

The 1960s and 1970s were arguably among America’s most turbulent post-Civil War decades. While the Vietnam War continued seemingly without end, protests and riots ravaged most cities, the Kennedys and MLK were assassinated, and corruption found its way to the highest levels of politics, culminating in Watergate.

In 1965, at the beginning of the chaos, twenty-two-year old Paul Letersky was assigned to assist the legendary FBI director J. Edgar Hoover who’d just turned seventy and had, by then, led the Bureau for an incredible forty-one years. Hoover was a rare and complex man who walked confidently among the most powerful. His personal privacy was more tightly guarded than the secret “files” he carefully collected—and that were so feared by politicians and celebrities. Through Letersky’s close working relationship with Hoover, and the trust and confidence he gained from Hoover’s most loyal senior assistant, Helen Gandy, Paul became one of the few able to enter the Director’s secretive—and sometimes perilous—world.

Since Hoover’s death half a century ago, millions of words have been written about the man and hundreds of hours of TV dramas and A-list Hollywood films produced. But until now, there has been virtually no account from someone who, for a period of years, spent hours with the Director on a daily basis.

Balanced, honest, and keenly observed, The Director offers a unique inside look at one of the most powerful law enforcement figures in American history.

“A fascinating and long overdue look, from the inner sanctum, at J. Edgar Hoover’s decades-spanning dictatorial grip on the FBI.  Paul Letersky takes you deep inside the psyche of the man who knew all the secrets and played them like a card shark.  With a fistful of aces, Hoover imposed his will while protecting his own mysterious inner life.”—Tom Brokaw, Special Correspondent for NBC News and bestselling author of The Greatest Generation

“There have been plenty of books about J. Edgar Hoover but this one brings new meaning to the term, ‘the devil is in the details’…. Letersky is a fine writer and storyteller and he told me things I never knew about the man—love him or hate him—who was a major figure in American history.”—Bob Schieffer, CBS News

Nothing But My Body

What Did You Eat Yesterday? (Volume 15)