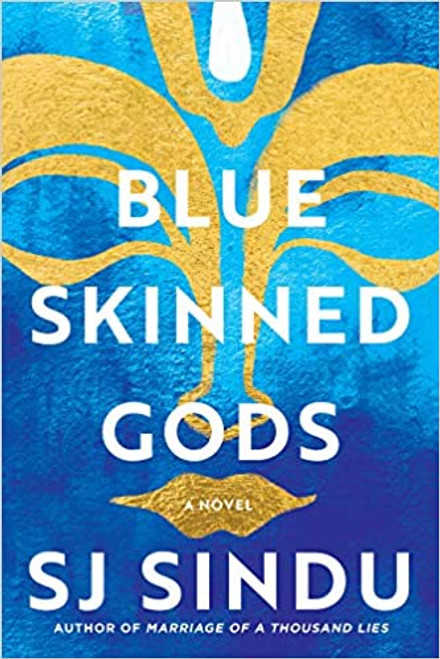 From the award-winning author of Marriage of a Thousand Lies comes a brilliantly written, globe-spanning novel about identity, faith, family, and sexuality.

In Tamil Nadu, India, a boy is born with blue skin. His father sets up an ashram, and the family makes a living off of the pilgrims who seek the child’s blessings and miracles, believing young Kalki to be the tenth human incarnation of the Hindu god Vishnu. In Kalki’s tenth year, he is confronted with three trials that will test his power and prove his divine status and, his father tells him, spread his fame worldwide. While he seems to pass them, Kalki begins to question his divinity.

Over the next decade, his family unravels, and every relationship he relied on—father, mother, aunt, uncle, cousin—starts falling apart. Traveling from India to the underground rock scene of New York City, Blue-Skinned Gods explores ethnic, gender, and sexual identities, and spans continents and faiths, in an expansive and heartfelt look at the need for belief in our globally interconnected world.

“SJ Sindu has written another brilliant novel in Blue-Skinned Gods. This time, she tells the story of a boy with blue skin who is trying to be the god everyone tells him he is . . . Here is a novel about the bonds between brothers, a deceptive tyrant and son, a mother who doesn’t know how to save herself or her child, a boy and how he yearns for his young loves, and so much more. The richness of this story will take hold of you and never let go.”—Roxane Gay

“Sj Sindu has given us a true gift in Kalki Sami and his journey. A coming-of-age story wielding philosophical, historical, and emotional moments full of passion, vividly described, Blue-Skinned Gods is one of the most original and beautiful novels I’ve read in a long time.”—Brandon Hobson, author of Where the Dead Sit Talking and The Removed