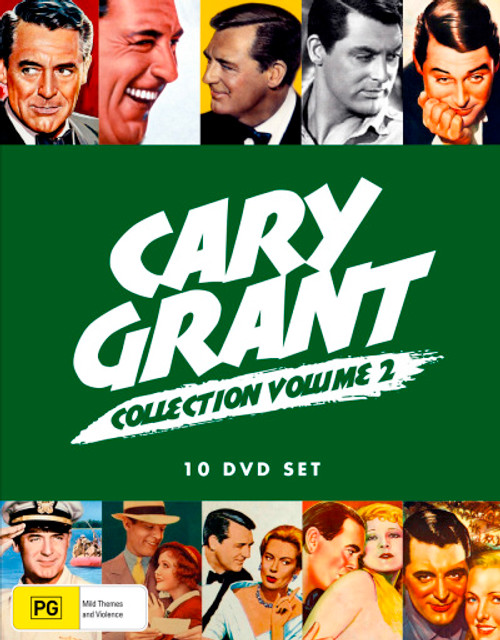 Charming, sophisticated and debonair, Cary Grant is one of the most popular and enduring Hollywood actors ever to grace the silver screen. His illustrious career spanned over 3 decades and included some of the most unforgettable roles in motion picture history.

The Cary Grant Collection features 10 films released between 1933 and 1966, the collection showcases the actors comedic timing and dramatic skills in a variety of roles. - Holiday, Only Angels have Wings, She done him Wrong, I'm no Angel, Houseboat, Indiscreet, Operation Petticoat, The Grass is Greener, Walk Don't Run, Hot Saturday.

Charming, sophisticated and debonair, Cary Grant is one of the most popular and enduring Hollywood actors ever to grace the silver screen. His illustrious career spanned over 3 decades and included some of the most unforgettable roles in motion picture history. The Cary Grant Collection features 10 films released between 1933 and 1966, the collection showcases the actor's comedic timing and dramatic skills in a variety of roles.

HOLIDAY: Johnny Case (Cary Grant), a free-thinking financier, has finally found the girl of his dreams--Julia Seton (Doris Nolan), the spoiled daughter of a socially prominent millionaire--and she's agreed to marry him! But when Johnny plans a holiday for the two to enjoy life while they are still young, his fiancee has other plans--she wants Johnny to work in her father's bank! As he tries to decide whether to follow his head or his heart, Johnny can rely on at least one Seton in his corner. She's Linda Seton (Katherine Hepburn), the down-to-earth younger sister of his soon-to-be-wife, and she likes Johnny just the way he is.

ONLY ANGELS HAVE WINGS: Bonnie Lee (Jean Arthur) is a travelling entertainer who gets more than she bargained for during a stopover in a South American port town. There she meets a handsome and aloof daredevil pilot, Geoff Carter (Cary Grant), who runs an airmail company, staring down death while servicing towns in treacherous mountain terrain. Both attracted to and repelled by his romantic sense of danger, she decides to stay on, despite his protestations.

SHE DONE HIM WRONG: Burlesque barroom singer Lady Lou (Mae West) knows everyone in town, especially the men. Unfortunately, her convict ex-boyfriend Chick Clark (Owen Moore) is the jealous type and vows violence against her if she behaves unfaithfully while he's in prison. To make matters worse, Lou's boss, Gus Jordan (Noah Beery Sr), secretly runs a prostitution and counterfeiting ring, and the director of the city mission next door is actually a federal agent (Cary Grant). What's a girl to do?

I'M NO ANGEL: Sharp, seductive and emotionally guarded Tira (Mae West) is a lauded and much-adored circus performer. Her newest suitor, a married New York City socialite named Kirk Lawrence (Kent Taylor), showers her with gifts. Kirk's cousin, Jack Clayton (Cary Grant), goes to Tira to try and convince her to end the affair. The two fall for one another, but when love and happiness risk taking Tira from the stage, her boss plots to break off the engagement and shackle her to the circus forever.

HOUSEBOAT: Tom Winston (Cary Grant) is struggling to raise his three children on his own after his wife's death. After meeting the charming and beautiful Cinzia Zaccardi (Sophia Loren) at a concert, he hires her as a live-in nanny. Unbeknown to Tom, Cinzia is actually a European socialite on the run from her domineering father (Harry Guardino) and has absolutely no experience with cooking, cleaning or raising children. She does, however, have an interest in Tom.

INDISCREET: Famous theatre actress Anna Kalman (Ingrid Bergman) has resigned herself to her single life, believing that she has missed her chance at meeting a husband. Weary of socializing in Europe, she returns to her London flat, where her sister Margaret (Phyllis Calvert) and diplomat brother-in-law Alfred (Cecil Parker) invite her to a banquet. She demurs until Alfred's banker friend, Philip Adams (Cary Grant), arrives and a flirtation begins. Their romance blossoms--but he's already married.

OPERATION PETTICOAT: Lieutenant Commander Matt Sherman (Cary Grant) is in charge of the submarine "Sea Tiger," which was badly damaged at a Philippine shipyard by a Japanese air raid. Seeking to make sail before an oncoming invasion, Sherman enlists the help of newly transferred Lieutenant Nick Holden (Tony Curtis) to use his talents as a con artist to procure the needed supplies. Once they're underway, Sherman evacuates a group of beautiful nurses, but can't find anyone who will take them off his hands.

THE GRASS IS GREENER: In order to maintain their crumbling stately home, Earl Vincent Rhyall and his wife Lady Hilary reluctantly open it to coach parties of American tourists, one of whom, Charles Delacro, falls for the lady of the manor. Feeling rather neglected, she begins to return his advances. In order to win her back, the Earl has to call on the services of his old flame, Hattie Durant and his very laconic, very English butler.

WALK, DON'T RUN: Arriving in Tokyo two days before the Olympic Games, Sir William Rutland (Cary Grant) struggles to find accommodations due to the number of tourists. When Rutland responds to a roommate-wanted ad posted at the British Embassy, he meets Christine Easton (Samantha Eggar), who reluctantly allows him to move in. Soon, Rutland decides to offer half of his room to an American athlete, Steve Davis (Jim Hutton)--and when he notices Easton and Davis hitting it off, he tries to bring them together.

HOT SATURDAY: Bank employee, Ruth Brock, has a reputation around town for being fast-and-easy but none of the panting suitors has made her yet. She disillusions them one after the other, but the last lad is a bad sport and starts a gossip scandal, among the hens and roosters, about her and a millionaire playboy and Ruth loses her job. Figuring that as long as she has the name, she might as well play the game, she looks him up.

Were I Not A Girl: The Inspiring and True Story of Dr. James Barry