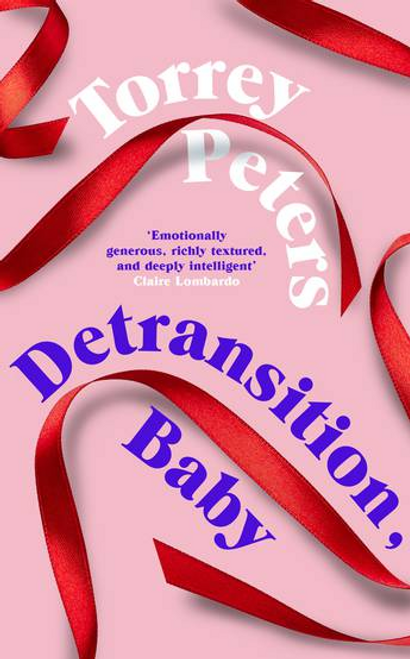 A uniquely trans take on love, motherhood, and those exes who you just can't quit.

Reese nearly had it all: a loving relationship with Amy, an apartment in New York, a job she didn't hate. She'd scraped together a life previous generations of trans women could only dream of; the only thing missing was a child. Then everything fell apart and three years on Reese is still in self-destruct mode, avoiding her loneliness by sleeping with married men.

When her ex calls to ask if she wants to be a mother, Reese finds herself intrigued. After being attacked in the street, Amy de-transitioned to become Ames, changed jobs and, thinking he was infertile, started an affair with his boss Katrina. Now Katrina's pregnant. Could the three of them form an unconventional family - and raise the baby together?
Author: Torrey Peters
Paperback Published February 2021 320 pages
Read and Recommended by Hendri:

"What can Sex and the City teach trans women? Unlike cis women who can resolve their Sex and the City problems by becoming an artist like Carrie, moving up the career ladder like Samantha, finding a faithful partner like Charlotte, or having a baby like Miranda, trans women are too often obstructed from these options. Reese is entering her mid-thirties, living with her trans lover Amy, and together they plan to raise a child together. Until the day it all falls apart and Amy decides to detransition to be Ames, mainly because they find it too challenging to live openly as a woman. After Ames has detransitioned and broken up with Reese, they embark on a secret romance with their own female boss, Katrina who becomes pregnant as a result. Feeling uneasy about becoming a father, yet still wanting to preserve their relationship with Katrina, Ames plans to make a strategic use of Reese’s motherhood dream, and convince her to join them in raising the child. While at first flinching at the offer, eventually Reese can’t resist her internal motherhood impulse, and enters into this maze of contemporary queer and trans kinship and romance. Witty, intelligent and engrossing, Detransition, Baby, offers a trans twist to Sex and The City, putting together experiences of trans women, cisgender women, and cisgender men in the same playground. Torrey Peters captures a trans-specific experience in this groundbreaking novel which imagines the possibility of queer kinship that cuts across different gender identities and defies the traditional familial arrangements."

Taste: My Life Through Food

Who Gets to Be Smart

The Seven Husbands of Evelyn Hugo

Skate for Your Life