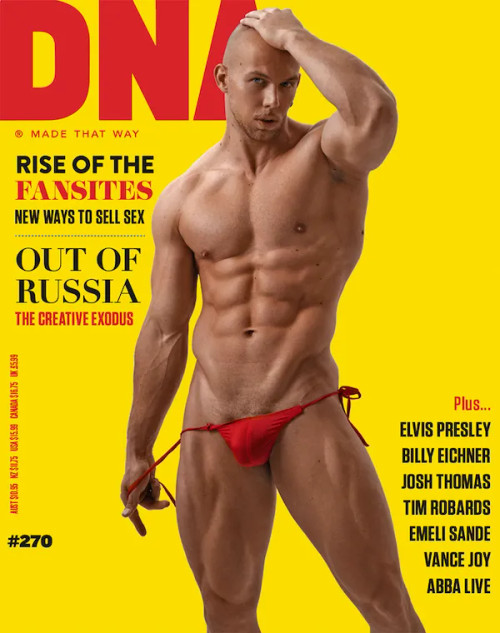 This month we celebrate all things on the rise!

Our feature story this month is Rise Of The Fansites. We speak with five hot dudes, including Morgxn Thicke, Jkab Ethan Dale and Gabe Woods, who are mixing business with pleasure and ask, where does this leave the traditional studios and their stars? Of course, there are great pics of the guys, too.

Russia’s invasion of Ukraine and the world’s boycott of Russian goods is proving disastrous for both Russian and Ukrainian creatives. Artists on the rise are leaving Russia in droves.

This month we speak with regular DNA contributing photographer Stas Vokman, a Russian who has now sought asylum in The Netherlands. He tells us why he had to leave Russia and why so many others are doing the same. We feature his shoot with Vlad Parker in this issue and tell his story in Out Of Russia.

On the cover is Russian bodybuilder, Sergey Yaroslavtsev, shot by Amer Mohamad before the war began. “I like to keep it intriguing,” says Amer. “The model is naked but you don’t see everything.” Sergey’s red G-string slipping off will definitely intrigue!

Josh Thomas (Please Like Me) has a new podcast called How To Be Gay and while he admits the title is silly, it covers a lot of serious ground including Josh coming out as autistic, and one guest who was tortured by Chechnyan authorities in their oppression of gays.

Want some sexy fashion? We’ve got it. Loungewear in silky boxers and cotton knitted Ts are relaxed and seductive. Meanwhile, on the party front, nothing beats a harness, matching jock and knee-high socks: a look that rocks.

In arts news we review the ABBAtar Voyage show in London – yes, there are tears! Emeli Sande tells us about her new album and coming out! And JudithLucy delivers some martini-dry one-liners in a chat about her new show, Still Here!

We head to the tiny town of Parkes in New South Wales for the annual Elvis Festival and discover a new generation of sexy boys who wanna be Elvis!

Our Straight Mate, Vance Joy, phones in while still recovering from a big weekend with his gay mates in Barcelona. Oh, and his new album, In Our Own Sweet Time is gorgeous.

We review music from Madonna, Orville Peck and Calum Scott, the latest book from Patrick Gale, the hot-right-now Red, White And Royal Blue, the final season of Hacks, plus Four Lives and The Staircase.

And the last word goes to Tim Robards: “I think I remember dancing on the bar at Stonewall in my underpants,” he confesses!

When Things Happen Together (includes special bonus gift on pre-orders)

Pocket The Queen Wisdom: Inspirational Quotes and Wise Words From an Iconic Monarch

Not Now, Not Ever: Ten years on from the misogyny speech

Jan Morris: Life from Both Sides