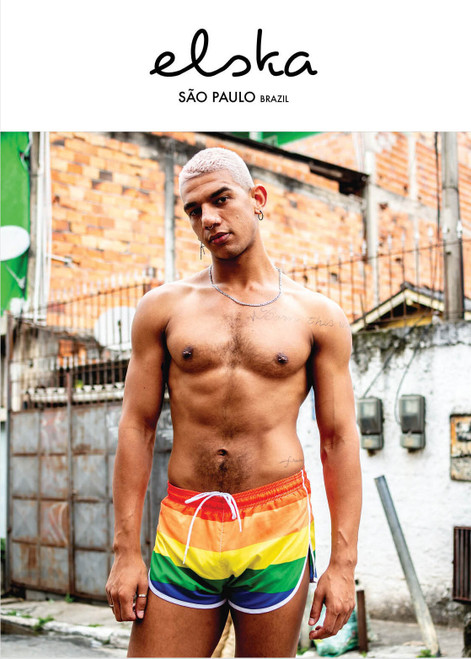 This edition was made in São Paulo, Brazil. Here we met a random smattering of local guys from one of the world's biggest and queerest cities, with a diverse population and a vibrant gay scene. We introduce this city to you via its men, who you can get to know through a selection of intimate photography and personal storytelling.

There's really something special about Latin America, a certain openness and boldness that is unparalleled in the world. When we made our first visit to this region for our fifteenth issue in Bogotá, Colombia, it became our most naked issue ever. Then when we released our twenty-fourth issue, made in Guadalajara, Mexico, that issue took the nudity crown. And now, this issue in São Paulo has followed suit to become another very exposed edition. We always say that nudity is never essential for Elska, but it's always nice to see, and here in Brazil we see a lot, even a guy who whips it out in a public park! Oh the scandal!

Another common feature of our Latin American issues comes in the stories, which tend towards the romantic or dramatic, including a good amount of focus on love, longing, and sex. Each of the men were invited to write a story about anything at all form their lives, as long as it's something true, and it just happened that these were the subjects they gravitated towards, but not only… Some of the story highlights here include Murillo J's description of a Paulista nightclub, full of creativity and free-spiritedness, and how they tried to adapt it for the COVID era; Rodrigo K's ode to anime, especially its homoeroticism and how it helped him become who he is today; Bruno V's tale of his transition, including devastating setbacks in surgery as well as hope for the future; and Mike F's chronology on how he discovered his dream to become a dancer and how he made it happen.

Includes stories in English, Portuguese, and Spanish (all followed by English translations where applicable)

One random Elska Collectors' Postcard is inserted inside.