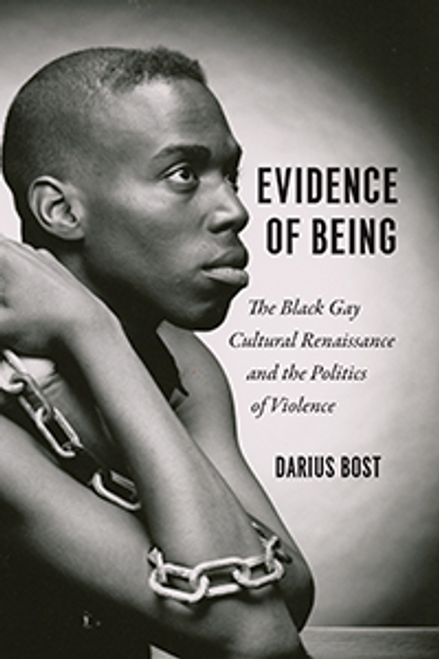 Evidence of Being opens on a grim scene: Washington DC’s gay black community in the 1980s, ravaged by AIDS, the crack epidemic, and a series of unsolved murders, seemingly abandoned by the government and mainstream culture. Yet in this darkest of moments, a new vision of community and hope managed to emerge.

Darius Bost’s account of the media, poetry, and performance of this time and place reveals a stunning confluence of activism and the arts. In Washington and New York during the 1980s and ’90s, gay black men banded together, using creative expression as a tool to challenge the widespread views that marked them as unworthy of grief. They created art that enriched and reimagined their lives in the face of pain and neglect, while at the same time forging a path toward bold new modes of existence. At once a corrective to the predominantly white male accounts of the AIDS crisis and an openhearted depiction of the possibilities of black gay life, Evidence of Being above all insists on the primacy of community over loneliness, and hope over despair.

“Recommended. . . Bost analyzes a renaissance of writing that sparked in these years [1978-1995] a second Harlem Renaissance, although one whose contributors were more openly gay. . . . They wrote to find a way to be, to survive, in the present and the future, if only as literary archive. Bost argues the power of cultural production that sustained “black gay men amid the ubiquitous forms of violence that targeted them.”-Choice
“Moving, theoretically rich, and original. . . . Evidence of Being is an important book that should impact the contours of Black and Queer Studies. Bost’s recuperation of the history of black gay cultural expression opens new lines of inquiry for scholars concerned with black sexuality, loss, history, and memory.”-Frontiers: A Journal of Women Studies
“Evidence of Being critically and brilliantly moves away from claims about the anti-relational and pessimistic natures of blackness and queerness, doing so with historical attentiveness and theoretical sophistication. There is no book that provides a more comprehensive history of black gay male activism and cultural production in the seventies and eighties than this one.”-Roderick Ferguson, author of Aberrations in Black
×