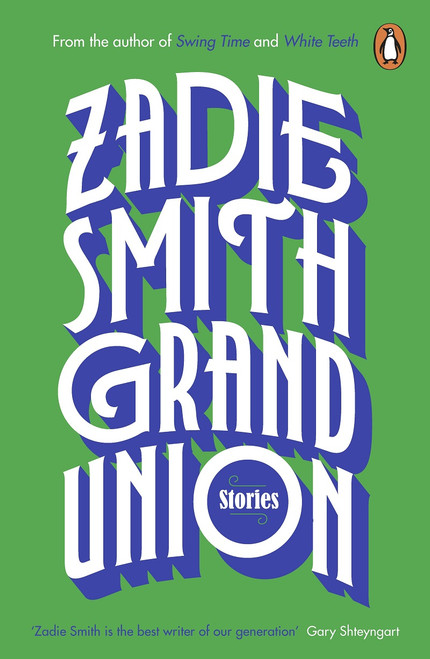 In the summer of 1959, an Antiguan immigrant in north-west London lives the last day of his life.

A mother looks back on her early forays into matters of the human heart, considering the destructive nature of desire.

A disgraced cop stands amid the broken shards of his life, unable to move forward into a future that holds no place for him.

A teenager chases spectres through virtual reality, trailed by a little girl with a runny nose and no surviving family.

We all take a much-needed break from this mess, on a package holiday where the pool's electric blue is endless, while political and environmental collapse happen far away to someone else.

Zadie Smith presents a sharply alert and slyly prescient collection about time and place, identity and rebirth, the persistent legacies that haunt our present selves and the uncanny futures that rush up to meet us.

“Zadie Smith is fearless. Her first short story collection, ‘Grand Union,’ is a soup of contradictions served up with flair. She experiments with form, with language, with conjecture, with the absurd. Tidbits of autofiction, and dashes of speculative fiction are mixed together and seasoned with current events… This is Smith at her best, integrating a compelling story line with perceptiveness and social commentary.” — The Washington Post

“‘Grand Union’ is an unusual creature, combining all the experimental exuberance of a writer discovering a form with the technical prowess of one at the height of her abilities. The result is exhilarating. Between the covers of one book, readers will find such disparate forms as allegory, parable, speculative thriller and satire, as well as shorter incarnations of Smith’s characteristic social comedy…Smith’s voracious intellect is on full display. With vitality and wit, she shuttles between the philosophical universal and the intensely local — a movement formally realized in stories like ‘Two Men Arrive in a Village’ — between the world and the self…It is a delight to watch Smith play.” —San Francisco Chronicle

“Thrillingly, the best work in ‘Grand Union’ is some of the newest. Among its previously unpublished stories and the two most recently published ones, we find the surreal, the nonlinear, the essayistic, the pointillist…Several stories take a mosaic approach, juxtaposing disparate scenes — in one case, venues around New York City involving music — into a brilliant whole. The effect, appropriately, is rather like instrumental improvisation…[‘Grand Union’] contains some of Smith’s most vibrant, original fiction, the kind of writing she’ll surely be known for. Some of these stories provide hints that everything we’ve seen from her so far will one day be considered her ‘early work,’ that what lies ahead is less charted territory, wilder and less predictable.”—Rebecca Makkai, The New York Times Book Review

“There’s no mistaking the voice, with its mix of assurance and conditionality…Here we see Smith is at her finest, when she reveals what we recognize but do not say. The strength of ‘Grand Union’ is the way such a sensibility informs these incidental pieces. This is the frisson that drives her writing, the balance between humor and self-laceration that cannot help but extend to us as well.” —David L. Ulin, Los Angeles Times

“Delightful…the tales will stay with you long after you’ve closed the book.” —Vogue.com

“An enchanting collection that examines the complexity of contemporary life. This book of short stories, the author’s first, refuses to define itself as any one thing.  Instead, Smith allows each story to take on a tone, genre and life of its own…This wild ride that Smith takes readers on is a delight to experience. Her characters are vivid and unique, as are her observations about the state of the world.”—Associated Press

“A varied and modern collection, suffused with Smith’s powers of observation and literary prowess.”—USA Today, 5 Books Not to Miss

How Do You Want Me?

Straight from the Horse's Mouth

B Is for Ballet (A Dance Alphabet)

What We're Told Not to Talk About (But We're Going to Anyway): Women's Voices from East London to Ethiopia

Solutions and Other Problems

How to Be Yourself: Life-Changing Advice from a Reckless Contrarian