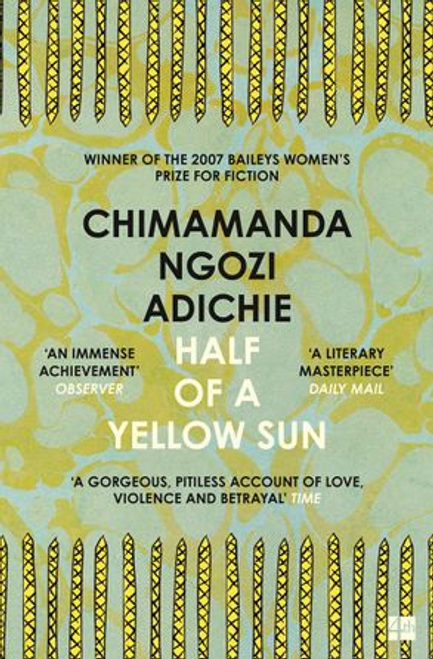 **THE WOMEN'S PRIZE FOR FICTION ‘WINNER OF WINNERS**

**Winner of the Orange Broadband Prize for Fiction 2007**

This highly anticipated novel from Chimamanda Ngozi Adichie is set in Nigeria during the 1960s, at the time of a vicious civil war in which a million people died and thousands were massacred in cold blood. The three main characters in the novel are swept up in the violence during these turbulent years. One is a young boy from a poor village who is employed at a university lecturer's house.

The other is a young middle-class woman, Olanna, who has to confront the reality of the massacre of her relatives. And the third is a white man, a writer who lives in Nigeria for no clear reason, and who falls in love with Olanna's twin sister, a remote and enigmatic character.As these people's lives intersect, they have to question their own responses to the unfolding political events. This extraordinary novel is about Africa in a wider sense: about moral responsibility, about the end of colonialism, about ethnic allegiances, about class and race; and about the ways in which love can complicate all of these things.

“A gorgeous, pitiless account of love, violence and betrayal during the Biafran war.” —Time

“Instantly enthralling. . . . Vivid. . . . Powerful . . . A story whose characters live in a changing wartime atmosphere, doing their best to keep that atmosphere at bay.” —The New York Times

“Ingenious. . . . [With] searching insight, compassion and an unexpected yet utterly appropriate touch of wit, Adichie has created an extraordinary book.” —Los Angeles Times

Motherland: A Memoir of Love, Loathing, and Longing