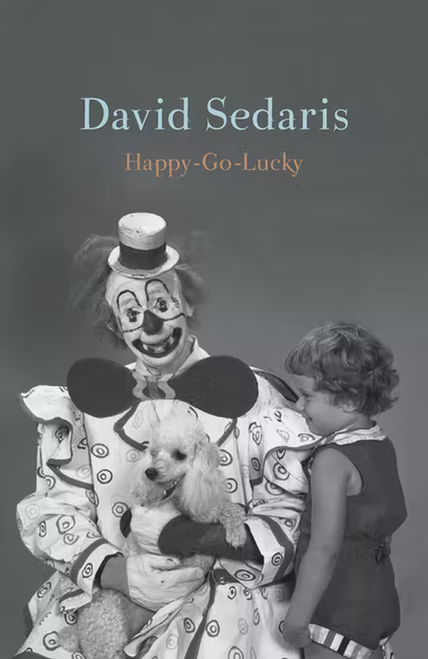 Back when restaurant menus were still printed on paper, and wearing a mask—or not—was a decision made mostly on Halloween, David Sedaris spent his time doing normal things. As Happy-Go-Lucky opens, he is learning to shoot guns with his sister, visiting muddy flea markets in Serbia, buying gummy worms to feed to ants, and telling his nonagenarian father wheelchair jokes.

But then the pandemic hits, and like so many others, he’s stuck in lockdown, unable to tour and read for audiences, the part of his work he loves most. To cope, he walks for miles through a nearly deserted city, smelling only his own breath. He vacuums his apartment twice a day, fails to hoard anything, and contemplates how sex workers and acupuncturists might be getting by during quarantine.

As the world gradually settles into a new reality, Sedaris too finds himself changed. His offer to fix a stranger’s teeth rebuffed, he straightens his own, and ventures into the world with new confidence. Newly orphaned, he considers what it means, in his seventh decade, no longer to be someone’s son. And back on the road, he discovers a battle-scarred America: people weary, storefronts empty or festooned with Help Wanted signs, walls painted with graffiti reflecting the contradictory messages of our time: Eat the Rich. Trump 2024. Black Lives Matter.

In Happy-Go-Lucky, David Sedaris once again captures what is most unexpected, hilarious, and poignant about these recent upheavals, personal and public, and expresses in precise language both the misanthropy and desire for connection that drive us all. If we must live in interesting times, there is no one better to chronicle them than the incomparable David Sedaris.

"It seems nothing is off limits to David Sedaris when it comes to mining the experiences of himself and his family in his writing - even the death of his father. “Did I see you taking notes during the service?” Amy Sedaris asks her brother following their father’s funeral. There is no surprise in her voice, just a playful scorn. In his previous book (Calypso) he explored his sister Tiffany’s suicide and it is touched on again here. In fact one story explores an accusation that their father sexually abused Tiffany. Her siblings discount her claims though admit their father could be inappropriate, even creepy. Wanting to photograph your daughters topless as you are pursuing ‘art photography’ is decidedly creepy. They told him to get lost. David’s relationship with his father is not whitewashed at all. Just as he disparages euphemisms for dying (passed, departed, transitioned), Sedaris has no sentimentality when it comes to telling unflattering stories about his father. In fact, it seems as though his death has probably freed him to do just that, yet small moments of tenderness still occasionally creep into his depiction of their difficult relationship ‘Bruised’ is another story that illustrates David’s unfiltered style - he explores being ‘sexually harassed by a twelve-year-old boy’ in a small French village. The inappropriateness of the situation was made more difficult as David didn’t possess the French language skills to reject the boy in a sensitive manner - and he was also very cognisant of the difficulties of dealing with your sexuality at this very young age. However, given the sensitivities around youth and sex, few writers would dare to write about this from a personal perspective. Current events also enliven some of the essays. His obsession with counting steps on his Fitbit has been previously documented and he discovers that taking a BLM protest march downtown is an ideal way to up his count! David Sedaris has many imitators but few would dare to go to the places he does so unflinchingly and manage to startle, amuse and entertain his readers."

Have You Heard Of?: RuPaul Charles: Flip Flap, Turn and Play!

Transtopia in the Sinophone Pacific

Facing the Music : A Broadway Memoir

Carrie Soto Is Back

After Eunuchs: Science, Medicine, and the Transformation of Sex in Modern China

The Love That Dares: Letters of LGBTQ+ Love & Friendship Through History

Boys and Oil: Growing Up Gay in a Fractured Land

The Other Half of You