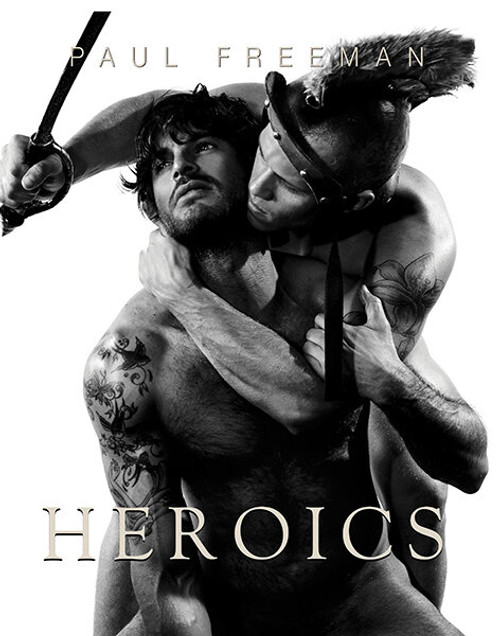 Heroics is a sometimes tongue-in-cheek look at the way European men have adorned and mythologized themselves and their physical prowess, in art over the centuries, and refers for inspiration to monumental sculptures  and paintings that were the work of artists who often tended to depict a fantasy of sensuality rather than the brutal masculinity of reality.

From the moment a more naturalistic human form began to be glorified on the artist canvas and in marble during the Italian Renaissance, men were shown with epic and fleshy muscularity, performing momentous and miraculous feats whilst scantily clad and militarily adorned, apparently oblivious to any danger to their physical (and very exposed) selves.

Through its splendidly diverse and glorious depictions, Heroics is a commentary on European arts’ interpretation of the classical tradition of heroism, through the neo-classical depictions of Imperial Spain, France and Britain and fast forwarded to today, where artistic license continues to reinterpret the old fantasies. And now Freeman lends a photographic hand.

This is an exciting and intelligent book, with large doses of history mixed with an ample splash of whimsy to occupy the viewer, who is kept constantly delighted at the twists and classical turns of the pages and the adornment of the models, of which there is an abundance of the masculine and edgily sexy kind that Freeman is famed for finding! You are never quite sure at first whether you are submerged in serious historic reflection or a Fellini-esque surreality.  Are these portraits of film extras, in period costume, on and off the set? There are distinctly modern urban elements in some images: kitchens, toilets, contemporarily graffitied buildings. Men posed in classical battle formation on one page are reclined on a sofa smoking cigarettes on another. There are images of European classical statues opposite images of models posed to look like statues, except that some of these evoke old Hollywood more than old Rome with Freeman’s signature  lighting a reminder of the Fresnel lights of old? Some images channel Gainsborough. But rudely: an 18th century sexy cherubic courtier in long boots and little else is reading a magazine with a picture of a woman wearing long boots and little else-and she looks surprisingly like Angelina Jolie! The same boy appears again in Waterloo drummer boy attire… and sunglasses, very Seargent Pepper-ish!

The warriors depicted in classical ‘battle formation’ are dramatically and beautifully reminiscent of, well, historic  fantasies about mythical Spartan battle formations- think Achilles and Patroklos, dying one for the other in close hand-to-hand battle.

And then there are impossibly beautiful languid boys, like the young Robert Wagner Casanova and the 1850s Crimean soldier sitting profiled as if for an old sepia daguerreotype, or a miniature for his lover. There are references and counter references to delight, like the 18th century Spanish nobleman proudly posturing and completely believable in his 20th century leather harness!  Yes, gay world makes less than subtle appearances in this art history of impossible manliness which, after all, Freeman implies, is the result of many an artists homosexual fantasies over many centuries, which means of course that the reader gets a history lesson as well as a costume parade