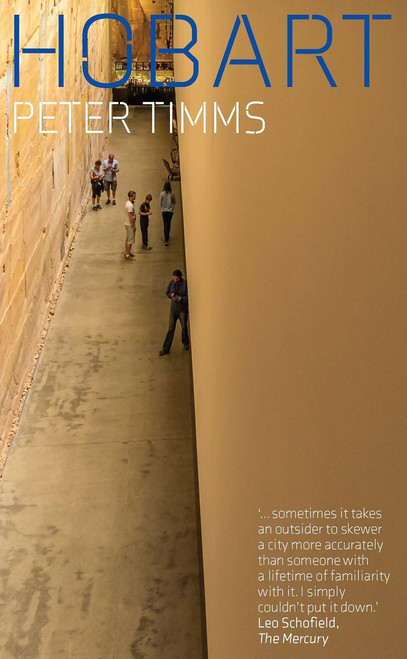 MONA has done a lot more than just rescue a flagging tourism economy. It has changed the city's body language, teaching it to stand up straight and look others squarely in the eye, even putting a swagger in its step.

Peter Timms leads us on a journey through his adopted city of Hobart, Australia's smallest, most southerly, least prosperous, but arguably most beautiful state capital.

From Hobart's convict legacy, its spectacular natural setting, heritage architecture and climate, to crime rates, economic hardship and new developments – not to mention the game-changer that is MONA – Timms explores the city with a mixture of affection, admiration, frustration and sadness.

Those who have experienced Hobart as tourists will be surprised and intrigued by the complex society and history this book reveals. Those who live there will surely discover their city anew, propelled by the author's fondness for it.

In a new introduction, Timms reflects on what has been nothing short of a tourism-driven revolution since Hobart was first published in 2009.

'…sometimes it takes an outsider to skewer a city more accurately than someone with a lifetime of familiarity with it. I simply couldn't put it down.' — Leo Schofield

'Three years ago, in 2009, Peter Timms published In Search of Hobart. Now his musings and reflections about Australia's oldest city, one where sedate Georgian elegance has been beautifully if inadvertently preserved, have been reconsidered, reappraised and updated. They fit tidily and aptly into what is now a consistently charming, intellectually consequent series on Australia's capitals.' — Mark Thomas, The Canberra Times

'Timms has set a high standard. This is the kind of book that everyone travelling to Hobart and Tasmania should read because it offers thoughtful explanations of the uniqueness of the island state.' — Sydney Morning Herald

Even If We Break