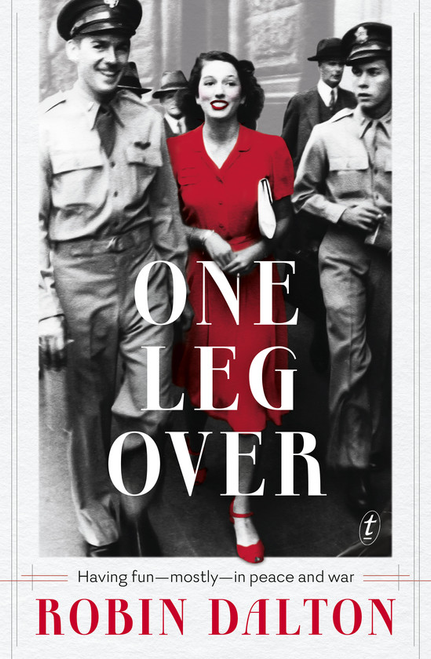 At the age of ninety-five, Robin Dalton looks back on her life, particularly on her love life.

Married at nineteen, disastrously, Robin has a lucky escape—her ‘Society Divorce’ makes the front page of Sydney newspapers, bumping the war to page three. Then there are the American and British servicemen in Sydney—the dancing, the many trysts and a number of not-too-serious engagements—before Robin travels to England ostensibly to marry one of those fiancés.

While most of Europe struggles with post-war austerity, Robin’s days and nights are filled with extravagant dinners,parties with royalty and romantic getaways, until she meets the man who will become, for a brief few years beforehis early death, her second husband.

One Leg Over is a story of love and romance, of fun and glamour, and of loss and great sadness. But above all it’s a celebration of a wonderful life.

Robin Dalton was born Robin Eakin in Sydney in 1920, and has lived in London since 1946. She has been a television performer, an intelligence agent, a literary agent and a film producer (Madame Souzatska starring Shirley Maclaine; Oscar and Lucinda starring Cate Blanchett), as well as an author. Her 1965 account of her childhood in Kings Cross, Aunts Up the Cross, remains an Australian classic. Both Aunts Up the Cross and Dalton’s previously unpublished childhood account of her family, My Relations, were published by Text Publishing in 2015.

‘It’s not every day a memoir is written by a nonagenarian (Robin Dalton is 96) but, on reflection, it makes sense that a long life, lived to the hilt, will make for far more interesting reading than the reflections of a precocious younger person, whose trials and tribulations have only just begun, so to speak…Dalton enjoys, I suspect, shocking the reader with her tales of romance, sexual encounters, several engagements and marriage…However, the content of One Leg Over should not be dismissed as fatuous and we are rewarded with a fascinating view of the upper classes in post-war England.’-Age

‘From a whirlwind of romantic liaisons in her teens to a divorce that truly scandalised Sydney and ended with her in the arms of David, Prince Philip’s best friend, One Leg Over is a story of Robin’s most wonderful memories of a life so rich in experience.’-Yours Magazine

Tell Me Why: The Story of My Life and My Music (Hardback)

Took the Children Away