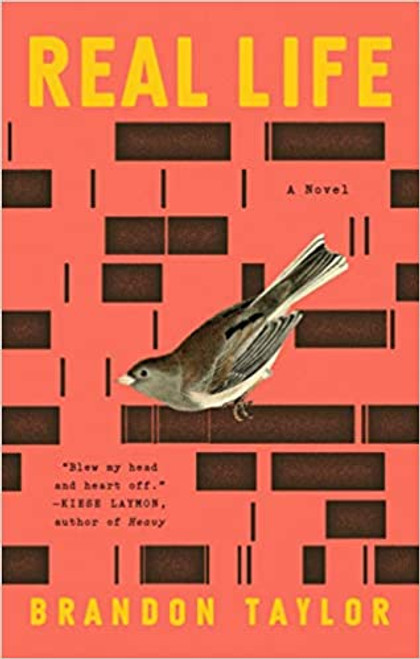 A novel of startling intimacy, violence, and mercy among friends in a Midwestern university town, from an electric new voice.

Almost everything about Wallace is at odds with the Midwestern university town where he is working uneasily toward a biochem degree. An introverted young man from Alabama, black and queer, he has left behind his family without escaping the long shadows of his childhood. For reasons of self-preservation, Wallace has enforced a wary distance even within his own circle of friends—some dating each other, some dating women, some feigning straightness. But over the course of a late-summer weekend, a series of confrontations with colleagues, and an unexpected encounter with an ostensibly straight, white classmate, conspire to fracture his defenses while exposing long-hidden currents of hostility and desire within their community.

Real Life is a novel of profound and lacerating power, a story that asks if it’s ever really possible to overcome our private wounds, and at what cost.

"This debut novel has enjoyed intense buzz and was named one of the most anticipated books of 2020 by Harper's Bazaar, Entertainment Weekly, Buzzfeed, and many more... And it quickly becomes apparent why! No one can write about academic life and its racist micro-aggressions and debilitating impacts on the students' lives, like Brendon Taylor, who was a former aspiring scientist himself. In his widely praised debut novel, Real Life, Taylor, recounts the hostility experienced by Wallace, a young black man from Alabama, studying in a predominantly white setting. Taylor explores the possibility of liberation and hopes (however limited) as Wallace is pushed to the brink of alienation and uncertainty in his academic life and friendship circle. Taylor beautifully entwines Miller's estrangement from peers with his intensely confusing yet erotic encounter with his white 'straight'-identified friend, Miller. Throughout the novel, both young men gradually open up themselves, sharing their vulnerability, and eventually bringing a new self-understanding through such a connection with one another."

“[A] stunning debut . . . Taylor proves himself to be a keen observer of the psychology of not just trauma, but its repercussions. . . . There is a delicacy in the details of working in a lab full of microbes and pipettes that dances across the pages like the feet of a Cunningham dancer: pure, precise poetry.” —Jeremy O. Harris, The New York Times Book Review

“A blistering coming of age story” —O: The Oprah Magazine