Song of Ourselves: Walt Whitman and the Fight for Democracy 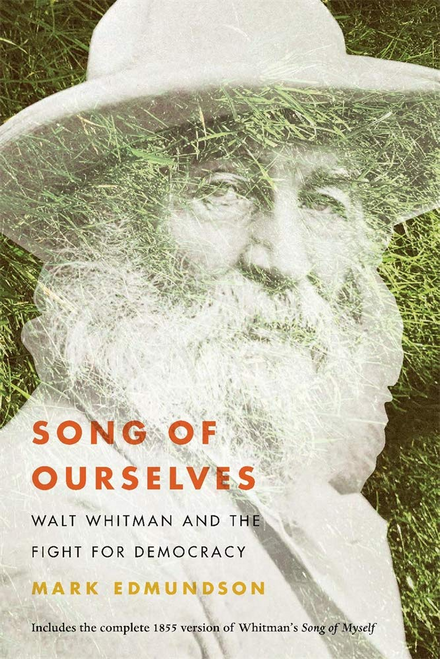 In the midst of a crisis of democracy, we have much to learn from Walt Whitman’s journey toward egalitarian selfhood.

Walt Whitman knew a great deal about democracy that we don’t. Most of that knowledge is concentrated in one stunning poem, Song of Myself.

Esteemed cultural and literary thinker Mark Edmundson offers a bold reading of the 1855 poem, included here in its entirety. He finds in the poem the genesis and development of a democratic spirit, for the individual and the nation. Whitman broke from past literature that he saw as “feudal”: obsessed with the noble and great. He wanted instead to celebrate the common and everyday. Song of Myself does this, setting the terms for democratic identity and culture in America. The work captures the drama of becoming an egalitarian individual, as the poet ascends to knowledge and happiness by confronting and overcoming the major obstacles to democratic selfhood. In the course of his journey, the poet addresses God and Jesus, body and soul, the love of kings, the fear of the poor, and the fear of death. The poet’s consciousness enlarges; he can see more, comprehend more, and he has more to teach.

In Edmundson’s account, Whitman’s great poem does not end with its last line. Seven years after the poem was published, Whitman went to work in hospitals, where he attended to the Civil War’s wounded, sick, and dying. He thus became in life the democratic individual he had prophesied in art. Even now, that prophecy gives us words, thoughts, and feelings to feed the democratic spirit of self and nation.

“What better way to imbibe the intoxicating stanzas of Walt Whitman’s Song of Myself than in the company of Mark Edmundson, author of the brilliantly argued Why Read? In Song of Ourselves Edmundson explicates and amplifies Whitman’s great wake-up call with an exuberant tenderness reached through decades of study and teaching. Here you will find our American ur-text, Whitman’s irreverent bible of New World democracy, revealed.”―Megan Marshall, author of the Pulitzer Prize–winning Margaret Fuller: A New American Life and Elizabeth Bishop: A Miracle for Breakfast

“Accessible, conversational, thoughtful, and eloquent, Edmundson has found his wonderfully distinctive and compelling voice in a book that is fascinated by democracy, fellow-feeling, sympathy, imagination, tyranny, and hierarchy. Song of Ourselves is one of the great books about literature, partly because it is about so much more than literature.”―Adam Phillips, author of On Wanting to Change

“There could be no better time than the present for Mark Edmundson’s tribute and guide to Walt Whitman. Song of Ourselves is a stirring and worthy evocation of the great poet of American democracy. Edmundson inhabits Whitman. Edmundson is Whitman’s companion, as Whitman is ours through all of our vexations, taking stock of multitudes still to come.”―Todd Gitlin, author of The Sixties: Years of Hope, Days of Rage

Alec - temporarily out of stock

This Book Is Feminist