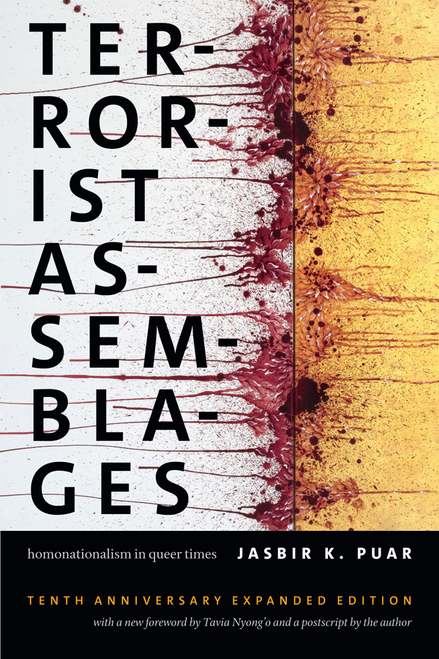 Puar argues that configurations of sexuality, race, gender, nation, class, and ethnicity are realigning in relation to contemporary forces of securitization, counterterrorism, and nationalism. She examines how liberal politics incorporate certain queer subjects into the fold of the nation-state, shifting queers from their construction as figures of death to subjects tied to ideas of life and productivity. This tenuous inclusion of some queer subjects depends, however, on the production of populations of Orientalized terrorist bodies. Heteronormative ideologies that the U.S. nation-state has long relied on are now accompanied by what Puar calls homonationalism—a fusing of homosexuality to U.S. pro-war, pro-imperialist agendas.

As a concept and tool of biopolitical management, homonationalism is here to stay. Puar’s incisive analyses of feminist and queer responses to the Abu Ghraib photographs, the decriminalization of sodomy in the wake of the Patriot Act, and the profiling of Sikh Americans and South Asian diasporic queers are not instances of a particular historical moment; rather, they are reflective of the dynamics saturating power, sexuality, race, and politics today.

This Tenth Anniversary Expanded Edition features a new foreword by Tavia Nyong’o and a postscript by Puar entitled “Homonationalism in Trump Times.” Nyong’o and Puar recontextualize the book in light of the current political moment while reposing its original questions to illuminate how Puar’s interventions are even more vital and necessary than ever.

“A profound and challenging book that should be read widely and repeatedly, Puar’s latest work contains revelations about contemporary power that offer avenues for transforming academic knowledge and our own subjectivities.” — Liz Philipose, Signs

“Terrorist Assemblages is brilliant, hyperkinetic, and perhaps, most of all, ferocious. It is ferocious in its analysis and critique not only of networks of control over and unrelenting superpanopticism of queer, racialized bodies but also of queer, feminist, and critical race theory and activism.” — Victor Román Mendoza, Journal of Asian American Studies

Twice In A Lifetime

Intimate Assemblages: The Politics of Queer Identities and Sexualities in Indonesia