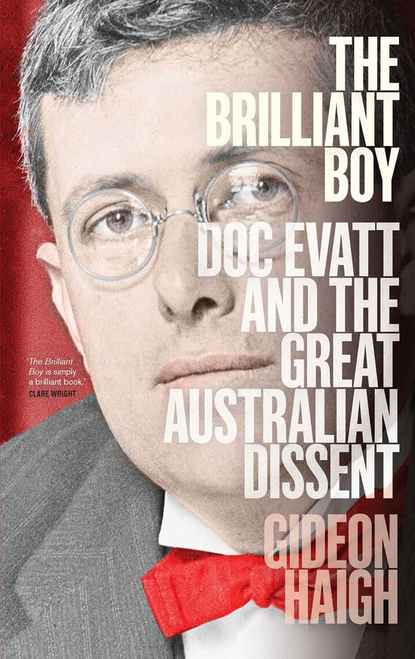 In a quiet Sydney street in 1937, a seven year-old immigrant boy drowned in a ditch that had filled with rain after being left unfenced by council workers. How the law should deal with the trauma of the family’s loss was one of the most complex and controversial cases to reach Australia’s High Court, where it seized the imagination of its youngest and cleverest member.

These days, ‘Doc’ Evatt is remembered mainly as the hapless and divisive opposition leader during the long ascendancy of his great rival Sir Robert Menzies. Yet long before we spoke of ‘public intellectuals’, Evatt was one: a dashing advocate, an inspired jurist, an outspoken opinion maker, one of our first popular historians and the nation’s foremost champion of modern art. Through Evatt’s innovative and empathic decision in Chester v the Council of Waverley Municipality, which argued for the law to acknowledge inner suffering as it did physical injury, Gideon Haigh rediscovers the most brilliant Australian of his day, a patriot with a vision of his country charting its own path and being its own example – the same attitude he brought to being the only Australian president of the UN General Assembly, and instrumental in the foundation of Israel.

A feat of remarkable historical perception, deep research and masterful storytelling, The Brilliant Boy confirms Gideon Haigh as one of our finest writers of non-fiction. It shows Australia in a rare light, as a genuinely clever country prepared to contest big ideas and face the future confidently.

'Here is a master craftsman delivering one of his most finely honed works. Meticulous in its research, humane in its storytelling, The Brilliant Boy is Gideon Haigh at his lush, luminous best. Haigh shines a light on person, place and era with the sheer force of his intellect and the generosity of his words. The Brilliant Boy is simply a brilliant book.' Clare Wright, Stella-Prize winning author of The Forgotten Rebels of Eureka

'Gideon Haigh is one of Australia’s most versatile and skilled historians.' Geoffrey Blainey

'This new biography of HV Evatt lifts the lid on his early life as a brilliant barrister and creative Justice of the High Court of Australia. It reveals the wellsprings that gave birth to his humanitarian and internationalist values that later helped in the creation of the United Nations. It helps to explain Evatt's valiant defence of liberty in fighting off the attempt to ban the communists in Australia. We need to constantly renew our acquaintance with such values. This book reminds us of Evatt's flawed genius but deep motivations, lest we ever forget.' The Hon Michael Kirby AC CMG

The Audacity of a Kiss: Love, Art, and Liberation