The Castanet Club: Tales of an Artistic Collective Born in Newcastle 1982-1991 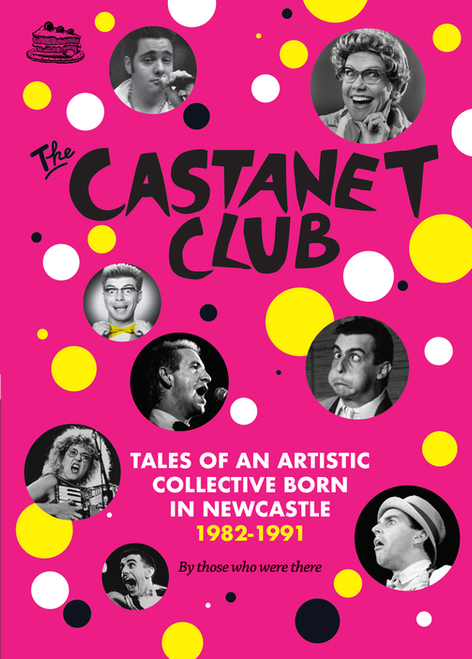 The Castanet Club, by those who were there!

Large format colour book with rare photographs and the personal stories of more than 25 members and crew. With a foreword by theatre legend Neil Armfield and an essay by award-winning author Mark Mordue.

When BHP’s steelworks still illuminated Newcastle’s night sky, across town a bunch of talented young performers lit up the stage.

The Castanet Club were a bunch of friends including drama students, visual artists, amateur musicians as well as a payroll clerk, industrial chemist and a typesetter. Their clubhouse in the working-class city grew into a touring act that became “a legend on the Australian cabaret circuit”.

The Castanet Club’s madcap energy and pop-art aesthetic was the product of a collective that blended music, comedy, art and cabaret in a uniquely Australian way.

In less than 10 years, The Castanet Club toured Australia, won the best of the Adelaide Fringe, performed at Edinburgh’s famous comedy festival, and made a feature film with leading director Neil Armfield.

Three decades on, a new book celebrates this remarkable story. The Castanet Club: Tales of an Artistic Collective Born in Newcastle 1982-1991 looks at how this unique ensemble was formed, and performers and members of the wider Castanet family spin charming and hilarious tales of what happened and what they did next. There are surprising guest appearances, including one by 1960s counterculture icon Tiny Tim.

The book is edited by Therese Kenyon and Stephen Clark and coincides with an exhibition at the Newcastle Museum, opening on July 10. Both were visual artists with The Castanet Club, and Clark performed in a dance act that was a forerunner of Strictly Ballroom.

In the book, Stephen Abbott and Warren Coleman pay tribute to the role Newcastle played as the crucible that produced not just the Castanets but Club friends John ‘Rampaging Roy Slaven’ Doyle and Jonathan Biggins (Wharf Revue, The Gospel According to Paul).

“Talent there had a licence to fail for a while as it develops and grows. Audiences forgive initial failures, because frankly there’s not much else going on and besides, they know everyone up on stage,” they write.

Also in the book: Nick Cave’s acclaimed biographer Mark Mordue (author of Boy On Fire), was in the audience in the early days and writes perceptively of the Castanet aesthetic:

“Jonathan Richman, the B-52s, Tiny Tim, Martin Sharp, Barry Humphries, Tom Jones, Herb Alpert and the Tijuana Brass, Elvis movies, afternoon TV shows, cabaret entertainment and commedia dell’arte … and Newcastle itself, a steel town that could be harsh and intolerant, but which had somehow made those ‘different’ all the closer – entire communities of heart and talent, of which the Castanet Club have become a benchmark and even a legend.”

“One regular fan with mental health issues claimed his attendance at Castanet gigs on Medicare. Discover the life-changing influence of the Castanet Club through more than 25 personal stories of life within and around this feel-good cultural phenomenon. More than a biography of a band, the book paints a portrait of a regional city and a generation on the cusp of change.

“The Castanets are not just a magnificently enjoyable experience. They are evidence that all in theatre in Australia is not yet lost … the perfect union of art and life.” James Waites, 1984

“In 1985 we started Belvoir, a seriously democratic venture, and The Castanets often played there. They always lit up that stage – they took possession of that miraculous space: in fact they defined it.” Neil Armfield, 2021

Ghost Wars: The Secret History Of The Cia, Afghanistan And Bin Laden, From The Soviet Invasion To September 10, 2001

The Best of Bert Newton DVD