The Fire Is upon Us: James Baldwin, William F. Buckley Jr., and the Debate over Race in America 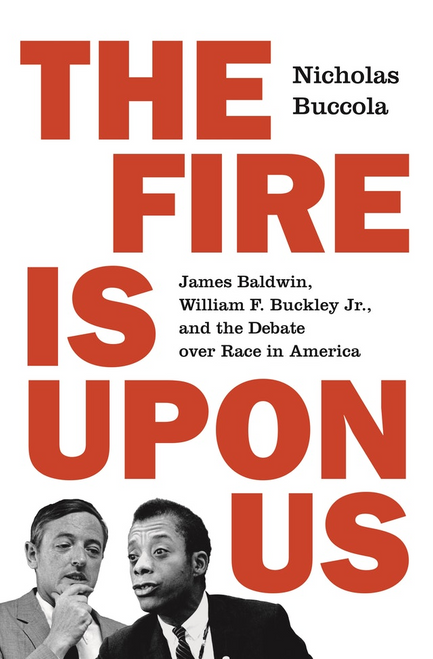 **One of Whoopi Goldberg's Favorite Things, ABC The View**
**Chicago Tribune writer John Warner's Book That Will Help You Better Understand the Messed-Up Nature of the World**
**New York Times Book Review Editors’ Choice**
**One of The Undefeated's 25 Can't Miss Books of 2019**
**One of The Progressive's Favorite Books of 2019**
**One of LitHub's 50 Favorite Books of the Year**
**One of Inside Higher Ed's Books to Give the Educator in Your Life for the Holidays**
**Shortlisted for the MAAH Stone Book Award, Museum of African American History**
**Shortlisted for the Ralph Waldo Emerson Award, Phi Beta Kappa Society**

On February 18, 1965, an overflowing crowd packed the Cambridge Union in Cambridge, England, to witness a historic televised debate between James Baldwin, the leading literary voice of the civil rights movement, and William F. Buckley Jr., a fierce critic of the movement and America’s most influential conservative intellectual.

The topic was “the American dream is at the expense of the American Negro,” and no one who has seen the debate can soon forget it. Nicholas Buccola’s The Fire Is upon Us is the first book to tell the full story of the event, the radically different paths that led Baldwin and Buckley to it, the controversies that followed, and how the debate and the decades-long clash between the men continues to illuminate America’s racial divide today.

Born in New York City only fifteen months apart, the Harlem-raised Baldwin and the privileged Buckley could not have been more different, but they both rose to the height of American intellectual life during the civil rights movement. By the time they met in Cambridge, Buckley was determined to sound the alarm about a man he considered an “eloquent menace.” For his part, Baldwin viewed Buckley as a deluded reactionary whose popularity revealed the sickness of the American soul. The stage was set for an epic confrontation that pitted Baldwin’s call for a moral revolution in race relations against Buckley’s unabashed elitism and implicit commitment to white supremacy.

A remarkable story of race and the American dream, The Fire Is upon Us reveals the deep roots and lasting legacy of a conflict that continues to haunt our politics.

The Wig: A Hairbrained History

We Will Not Cancel Us: And Other Dreams of Transformative Justice (Emergent Strategy Series)

White Privilege: The Myth of a Post-Racial Society