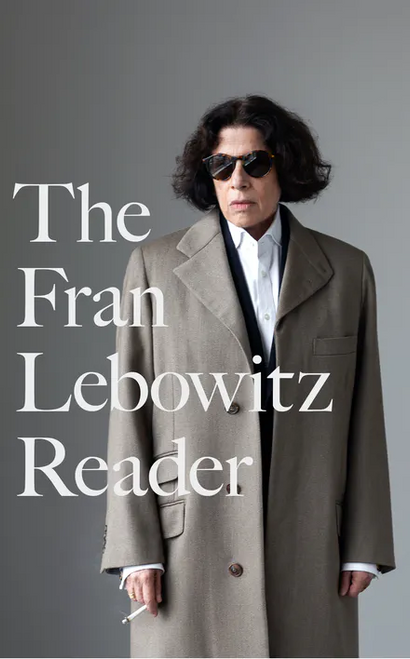 Fran Lebowitz is a New York legend. Arriving in the city over fifty years ago, she made her name as a columnist on Andy Warhol's Interview magazine, before publishing two bestselling collections of essays. She's one of America's most insightful social commentators, a sought-after public speaker, a style icon, wit and flaneur.

In these essays, Lebowitz turns her trademark caustic wit to everything from children ('rarely in the position to lend one a truly interesting sum of money'), to novelty ice cubes ('flowers belong in one's lapel, not in one's bourbon') and landlords ('it is the solemn duty of every landlord to maintain an adequate supply of roaches'). And her attitude to work is the perfect antidote to our exhausting culture of self-betterment ('3.40pm. I consider getting out of bed. I reject the notion as being unduly vigorous. I read and smoke a bit more').

"Hilarious ... an unlikely and perhaps alarming combination of Mary Hartman and Mary McCarthy.... To a dose of Huck Finn add some Lenny Bruce, Oscar Wilde and Alexis de Tocqueville, a dash of cabdriver, an assortment of puns, minced jargon, and top it off with smarty pants." ― The New York Times

"Right on the mark ... Among the things she hates ... baggage-claim areas, high tech, after-shave lotion, adults who roller skate, children who speak French, or anyone who is unduly tan." ― Newsweek

Taste: My Life Through Food

Nellie: The Life and Loves of Dame Nellie Melba