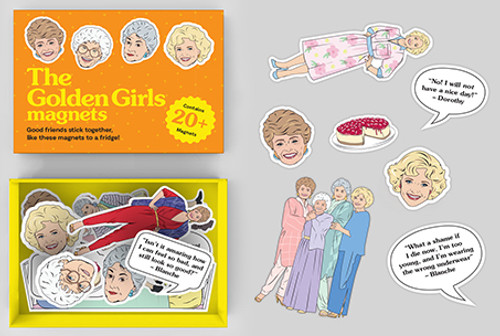 These colourful magnets honour Dorothy, Rose, Blanche and Sophia, the four leading ladies from TV’s The Golden Girls. The show ran for seven seasons (collecting a staggering 58 Emmy nominations and 11 wins along the way) and, over the years, this hit comedy about four fierce and sassy ladies sharing a house in Miami charmed millions of viewers with its wit and verve, and most of all, the strength and quality of the friendship between its four iconic characters.

Printed on high-quality magnetic film, and packaged in a cute box, this is the perfect gift for fanatics of the ground-breaking show that helped push the envelope of representation in television comedy. Use these cute magnets to stick cheesecake recipes to your refrigerator, or to spice up the rear bumper of your car. The (magnetized) world is your oyster.

The Flying Kangaroo : 100 Years of Qantas