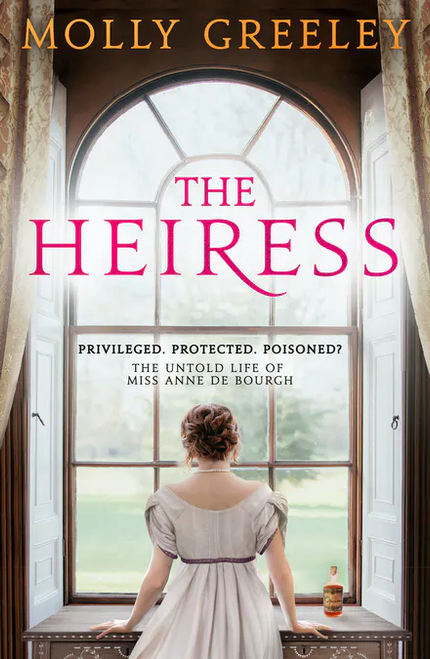 A beautifully written LGBTQ+ reimagining of the life of one of Pride & Prejudice's most underdeveloped characters, Miss Anne de Bourgh, The Heiress is an extraordinary tale of self-discovery and liberation set in Jane Austen's beloved world.

As a fussy baby, Anne was prescribed laudanum to quiet her and has been given the opium-heavy syrup ever since on account of her continuing ill health. While her mother is outraged when Darcy chooses not to marry Anne, as has been long planned, Anne can barely raise her head to acknowledge the fact.

But little by little, she comes to see that what she has always been told is an affliction of nature might in fact be one of nurture - and one, therefore, that she can beat. In a frenzy of desperation, she throws away her laudanum and seeks refuge at the London home of her cousin, Colonel Fitzwilliam.

Suddenly wide awake to the world but utterly unprepared, Anne must forge a new identity among those who have never seen the real her - including herself.

With its wit, sensuality and deep compassion for the human heart, The Heiress is a sparklingly rebellious novel that takes a shadowy figure from the background of Pride & Prejudice, one of the world's most beloved books, and throws her into the light.

'Haunting. The Heiress has all the hallmarks of nineteenth-century Gothic, which doesn't shy away from "modern" ills, such as the opiate crisis, Munchausen syndrome by proxy, and homophobia. Highly recommended.' - Finola Austin, author of Bronte's Mistress

All Boys Aren't Blue: A Memoir-Manifesto

All About Sarah (Paperback)