The Jewel in the Crown Complete Series DVD 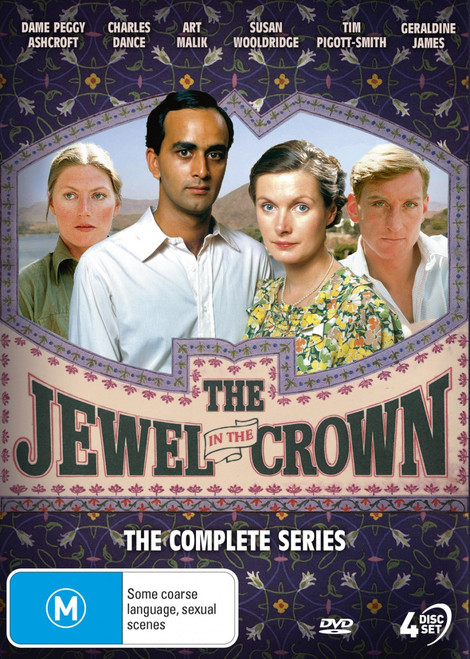 The Jewel in the Crown was hailed by critics as one of the most thoughtful and important television dramas ever. This sweeping 14-part remastered adaptation of Paul Scott's Raj Quartet is the story of the men and women of both ruling and ruled classes of WWII India, trying amidst the turmoil to come to terms with the drastic changes taking place around them, knowing that their lives will never be the same again.

It tells the story of the final years before India gained independence in 1947. It is rare for a filmed adaptation to successfully preserve the richness and complexity of a great novel, but this epic miniseries succeeds both as personal drama and historical panorama.

"In 1942 Daphne Manners, a naive young woman newly arrived in the town of Mayapore, befriends Hari Kumar, an Indian-born journalist who has spent most of his life in England. With his dark skin and educated English accent, Hari feels like an outsider wherever he goes, but Daphne understands his plight and they become romantically involved. Their developing relationship is jealously observed by local police chief Ronald Merrick, a man haunted by his own closeted homosexual demons. When the lovers are attacked in the gardens of the ruined Bibighar palace and Daphne is raped, Merrick seizes his opportunity, pins the crime on Hari, and has the young man jailed. Distraught, Daphne flees to her aunt's home in Kashmir, where she dies giving birth to a half-caste child. The focus then shifts to Sarah Layton, a young Englishwoman who becomes fascinated by the story of Daphne and Hari, and who will have her own encounter with Ronald Merrick.

The events in the Bibighar gardens become a symbol of the violent struggle for Indian independence, and other symbols - Daphne's bicycle, a length of butterfly lace, a picture of Queen Victoria on an Indian throne - appear and reappear, linking people and events. This helps to give coherence to the plot even as it spans five years and expands to include many characters whose lives intersect in complex and unexpected ways.

With a huge cast and breathtaking location photography, The Jewel in the Crown was an enormous undertaking when it was made in the early 1980s. Twenty years later it has lost none of its power, and it remains one of the best films ever made for television." Simon Leake

Why I'm Not A Millionaire

The Secret Life of the Savoy: and the D'Oyly Carte family