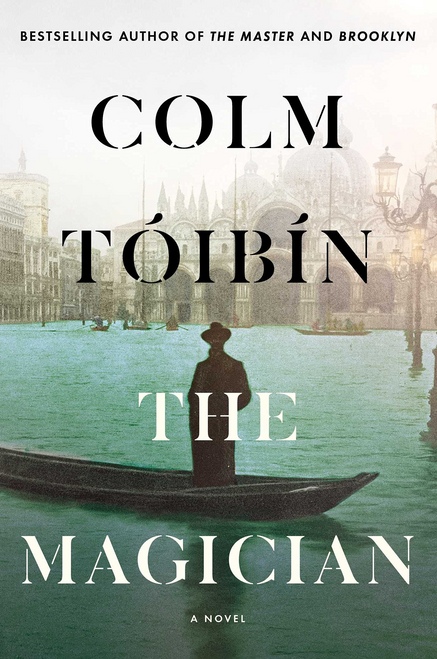 From one of today’s most brilliant and beloved novelists, a dazzling, epic family saga set across a half-century spanning World War I, the rise of Hitler, World War II, and the Cold War.

Colm Tóibín’s magnificent new novel opens in a provincial German city at the turn of the twentieth century, where the boy, Thomas Mann, grows up with a conservative father, bound by propriety, and a Brazilian mother, alluring and unpredictable. Young Mann hides his artistic aspirations from his father and his homosexual desires from everyone. He is infatuated with one of the richest, most cultured Jewish families in Munich, and marries the daughter Katia. They have six children. On a holiday in Italy, he longs for a boy he sees on a beach and writes the story Death in Venice. He is the most successful novelist of his time, winner of the Nobel Prize in literature, a public man whose private life remains secret. He is expected to lead the condemnation of Hitler, whom he underestimates. His oldest daughter and son, leaders of Bohemianism and of the anti-Nazi movement, share lovers. He flees Germany for Switzerland, France and, ultimately, America, living first in Princeton and then in Los Angeles.

In a stunning marriage of research and imagination, Tóibín explores the heart and mind of a writer whose gift is unparalleled and whose life is driven by a need to belong and the anguish of illicit desire. The Magician is an intimate, astonishingly complex portrait of Mann, his magnificent and complex wife Katia, and the times in which they lived—the first world war, the rise of Hitler, World War II, the Cold War, and exile. This is a man and a family fiercely engaged by the world, profoundly flawed, and unforgettable. As People magazine said about The Master, “It’s a delicate, mysterious process, this act of creation, fraught with psychological tension, and Tóibín captures it beautifully.”

"Once again Colm Toibin turns his attention to a famous closeted gay writer as he did with Henry James in his acclaimed novel The Master. That novel focused on a short period in the writer’s life, whereas here with the illustrious German writer Thomas Mann, Toibin  ranges chronologically over the entire life. The novel unfolds against the rise of the Nazis and then a life spent in exile, in America and Switzerland. Mann is attracted to men, but his desire is quenched not by physical intimacy but small moments of connection - an exchange with a handsome waiter or private letters with a man who might offer more if ever asked. He marries his boyish wife Katya as he is enchanted by her lively spirit, yet is physically attracted to her handsome twin Klaus. Toibin unfolds how the various literary works came to be written and A Death in Venice is especially fascinating. He had Mahler in mind when creating the main character Aschenbach. Mann enjoyed literary fame almost instantly after the publication of Buddenbrooks, yet this great man of literature was something of a failure as a father and this is compounded towards the climax of the novel where he must make a choice in regard to his troublesome son Klaus. The lively characterisation is the highlight of the novel and many of the secondary characters shine - especially his wild, bohemian children Klaus and Erika. But many famous figures make striking cameos such as W.H. Auden (who entered into a marriage of convenience with Erika) and Christopher Isherwood, although it is Alma Mahler who steals the show whenever she appears through her appalling behaviour. Fifteen years in the writing and thoroughly researched, this is a fascinating and thoroughly captivating portrait of a famous writer, his literary success but also his emotional repression, set against the sweeping upheavals of the 20th century."

"The Magician recaptures a literary giant... Symphonic and moving… Maximalist in scope but intimate in feeling."—Dwight Garner, The New York Times

"Having already fictionalized four years of Henry James’s life in 2004’s The Master, Tóibín, a careful, elegant writer, has turned his sights on Thomas Mann. Something like 60 years are covered in this book as teenage uncertainty makes way for literary superstardom, though the real action takes place between the world wars. Mann, by then a famous author, took a stance against National Socialism (after his children dragged it out of him), which resulted in devastating, foreseeable repercussions for himself, his family, and his writing."—Bloomberg