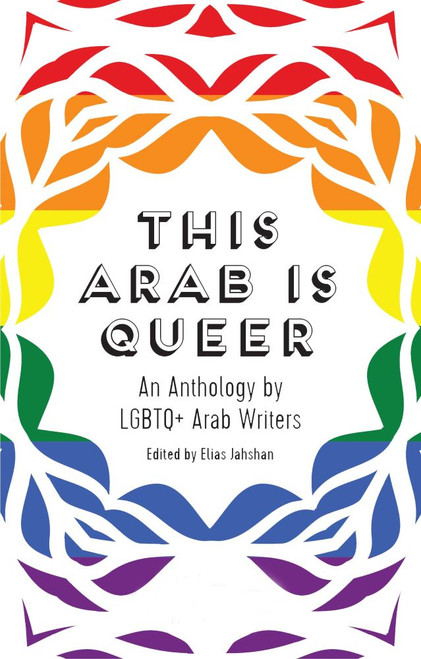 Edited by Palestinian-Lebanese-Australian journalist Elias Jahshan, this ground-breaking anthology features the compelling and courageous memoirs of eighteen queer Arab writers – some internationally bestselling, others using pseudonyms. Here, we find heart-warming connections and moments of celebration alongside essays exploring the challenges of being LGBTQ+ and Arab.

From a military base in the Gulf to loving whispers caught between the bedsheets; and from touring overseas as a drag queen to a concert in Cairo where the rainbow flag was raised to a crowd of thousands, this collection celebrates the true colours of a vibrant Arab queer experience.

‘A wonderful collection of stories, of people unshackled, of tongues untied. This surprising book allows the deliberately silenced and the preferably unheard to speak. Profoundly moving and uplifting. Yes, This Arab is Queer.’ - Rabih Alameddine

‘Visionary. A powerful and moving portrait of life as a queer Arab.’ - Sabrina Mahfouz

‘A vital addition to what it means to be Arab. This collection showcases the magnificent diversity and richness of Arab identity.’ - Layla Al Ammar

‘A heartfelt, moving collection, unflinching in its vulnerability, courageous and empowering in its honesty. These writers hold our gaze, demanding to be seen, on their own terms.’ - Yassmin Abdel-Magied

‘A fascinating insight into the realities of being a queer Arab, the book is likely to provoke, inspire and create conversations.’ -Entertainment Focus

About the Editor: Elias Jahshan (he/him) is a Palestinian-Lebanese-Australian journalist and writer. He is a former editor of Star Observer, Australia’s longest-running LGBTQ+ media outlet, and a former board member of the Arab Council Australia. His short memoir ‘Coming Out Palestinian’ was anthologised in Arab Australian Other: Stories on Race and Identity, and he has written freelance for outlets including The Guardian, SBS Voices, My Kali and The New Arab. Born and raised in western Sydney, he now lives in London.