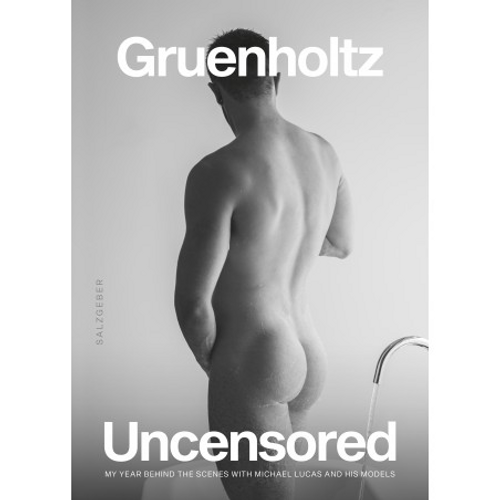 In this unique collection of black and white photography, acclaimed artist Gruenholtz has accomplished something very rare in male erotica.

In the style of a classic fine-art photo documentarist, he captures the fascinating world of gay adult entertainment with virtuosity and sensitivity. His beautiful “behind-the-scenes” photographs, simultaneously frank and lyrical, constitute a compelling long-form portrait of Michael Lucas and his models over the course of an unprecedented year-long creative journey. Shot on location in New York, Fire Island, Puerto Vallarta and Barcelona.

"The genesis of this book was sparked by a message on Instagram from legendary adult performer Michael Lucas to photographer Kenneth Gruenholtz complimenting him on his photography. This led to Gruenholtz photographing Michael at Belvedere Castle, Cherry Grove, but after hanging out with him for the session, Gruenholtz began to think about a larger project. He proposed a black and white, fine-art look at Michael’s world over a 12-month period. And so it was decided that he would photograph Michael and his models ‘behind the scenes’ – during promotional photo shoots, before and after video shoots, and during breaks. Sometimes he also had access to shoot a model away from the Lucas Entertainment world. The featured models include Ben Bateman, Devin Franco, Shawn Reeve, Rod Fogo, Christian Haynes, Brock Magnus, Donato Reyes, Wagner Vittoria, Viktor Rom, Jesse Santana and many others. An added bonus is that Gruenholtz provides some brief detail about most images, some details about the models and how he came to take the photograph. The photographs were shot in a variety of locations - Cherry Grove, Hell’s Kitchen and Chelsea, Vic (north of Barcelona), and Puerto Vallarta. Uncensored certainly lives up to its title and is absolutely the most explicit male erotic photography book on the market today with an abundance of images that are sexually graphic but also beautifully composed and shot." Reviewed by Graeme for DNA Magazine