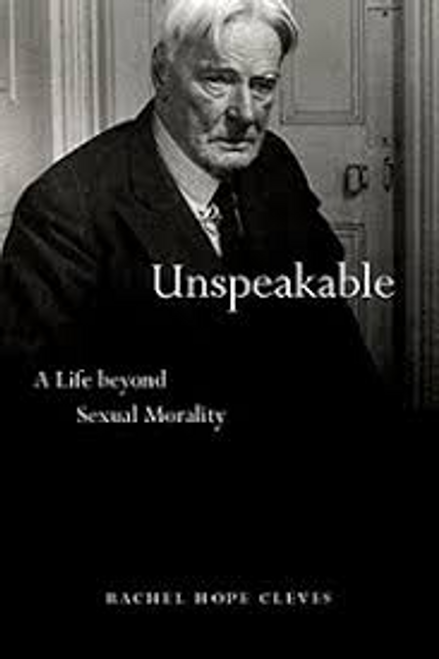 The sexual exploitation of children by adults has a long, fraught history. Yet how cultures have reacted to it is shaped by a range of forces, beliefs, and norms, like any other social phenomenon.

Changes in how Anglo-American culture has understood intergenerational sex can be seen with startling clarity in the life of British writer Norman Douglas (1868–1952), who was a beloved and popular author, a friend of luminaries like Graham Greene, Aldous Huxley, and D.H. Lawrence, and an unrepentant and uncloseted pederast. Rachel Hope Cleves’s careful study opens a window onto the social history of intergenerational sex in the nineteenth and twentieth centuries, revealing how charisma, celebrity, and contemporary standards protected Douglas from punishment—until they didn’t.

Unspeakable approaches Douglas as neither monster nor literary hero, but as a man who participated in an exploitative sexual subculture that was tolerated in ways we may find hard to understand. Using letters, diaries, memoirs, police records, novels, and photographs—including sources by the children Douglas encountered—Cleves identifies the cultural practices that structured pedophilic behaviors in England, Italy, and other places Douglas favored. Her book delineates how approaches to adult-child sex have changed over time and offers insight into how society can confront similar scandals today, celebrity and otherwise.

“A major achievement. Cleves has meticulously recreated the history of a widely practiced sexual culture that will shock readers. Perhaps most startling is just how common and how recent was the celebration of pederasty among public figures like Norman Douglas and his friends. Like other groundbreaking work in the history of sexuality, this bookdemonstrates that both sexual practices and attitudes toward them—even those seen as most taboo—are as subject to reversal as anything else in the broader culture.”-Nicholas L. Syrett, author of American Child Bride: A History of Minors and Marriage in the United States
×