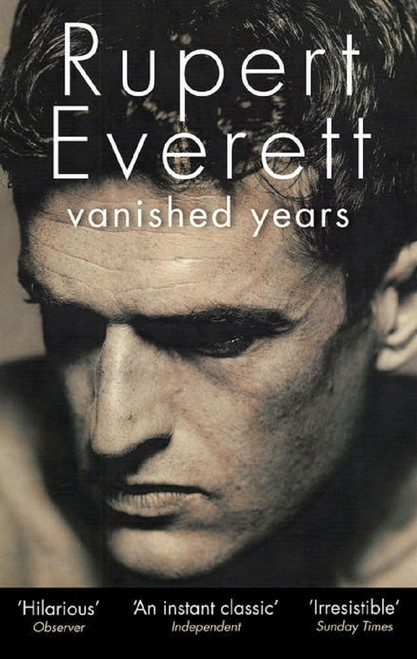 A triumphant follow-up to the classic bestseller RED CARPETS AND OTHER BANANA SKINS - fascinating, witty and endlessly entertaining.

Rupert Everett's first memoir - RED CARPETS AND OTHER BANANA SKINS - was an international bestseller and an instant classic on publication in 2006. Reviewers compared him to Evelyn Waugh, David Niven, Noel Coward and Lord Byron. But Rupert Everett is - of course - one of a kind.

Mischievous, touching and nothing less than brilliant, this new memoir is filled with stories, from childhood to the present. Astonishing encounters; tragedy and comedy; vivid portraits of friends and rivals; razor-sharp observations of the celebrity circus from LA to London and beyond. . . there is something extraordinary on every page.

A pilgrimage to Lourdes with his father is both hilarious and moving. A misguided step into reality TV goes horribly wrong. From New York to Moscow to Berlin to Phnom Penh, VANISHED YEARS takes the reader on a wild and wonderful new journey with a charming (and rather disreputable) companion.

"Everett's observations manage to be both devastating and sympathetic as he trains his sights on his glittering comrades, as well as himself."  —Vogue
"With nobody left in Tinseltown to please, Everett unleashes himself as a hilarious, unsparingly bitchy chronicler of celebrity hell . . . irresistible."  —Books of the Year, Sunday Times
"It has been an extraordinary year for theatre biographies, but even in a very strong field, Vanished Years was a clear winner. . . . Surprising, hilarious and wise."  —Sheridan Morley Prize judges
"The veteran actor of stage and screen oozes rakish charm, a gossipy court jester providing wickedly witty—if not particularly consequential—commentary on show business shenanigans. . . . A guilty pleasure, albeit a rather sophisticated and tony offshoot of the species."  —Publishers Weekly on Red Carpets and Other Banana Skins
×

Red Carpets And Other Banana Skins

They Called Us Enemy (Expanded Version)