Versailles: The Complete Series One, Two and Three DVD 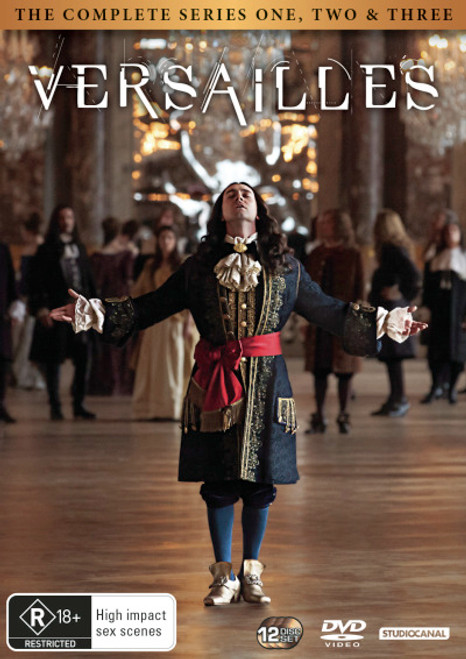 SERIES 1:
Versailles, 1667. Haunted by the trauma of the Fronde as the nobles of his court begin to rebel against the monarchy, Louis XIV (George Blagden) in his 28th year in a Machiavellian political move decides to make the nobility submit by imposing a definite move of the court from Paris to Versailles, his father's former hunting lodge.

Trapped by their king's "invitation", the nobles of Paris gradually come to see the castle as a gilded prison and soon even the most humble courtiers of the King begin to show their viciousness as the alcoves of secrets, politics and war are maneuverer through, revealing Versailles in all its glory and brutality.

SERIES 2:
Versailles, 1672-1678. The Franco-Dutch war wages on, Louis XIV confronts his bitter rival, Guillaume d'Orange (George Webster). But danger threatens even inside the kingdom, within the court of Versailles itself with the Poison scandal. Between mysticism and obscurity, a dive into the dark side of power, with the king's downward spiral, and his return towards the light.

Louis has completed the first stage of his plan: to build the most beautiful palace in Europe, far away from Paris... And to lock the nobility inside it so as to exercise absolute control over it. But his plan backfires. Louis has created a new civilisation where the courtiers are ready to do anything to get to the Sun. Behind the veneer of etiquette, they dream of money, power, and climbing the social ladder. They will do whatever they have to: morality is waning, and poison spreads...

Versailles is rotting. Blinded by his affection for Madame de Montespan (Anna Brewster), Louis is deaf to the Church's injunctions. The greatest enemy standing before him is no longer the nobility, nor is it Guillaume d'Orange: the palace that he himself designed could end up becoming his worst enemy.

SERIES 3:
Louis has brought an end to the Affair of the Poisons and won the war against Holland. It seems that nothing will thwart his plans to expand his empire and assert his power over the whole of Europe. But his dreams come at a cost, the people have had enough of paying the trouble is brewing.

At Versailles too, Louis must face new challenges. Maintenon (Catherine Walker), his new mistress, leads him into an assertion of absolutism which causes considerable dissent in the Court. Louis' tolerance for any kind of dissidence, be it from his people, Protestants or the Pope himself, slowly disappears. However, a threat hangs over Louis, in the form of a mysterious prisoner whose face is hidden behind an iron mask...

Oliver Sacks: His Own Life DVD