All is True DVD 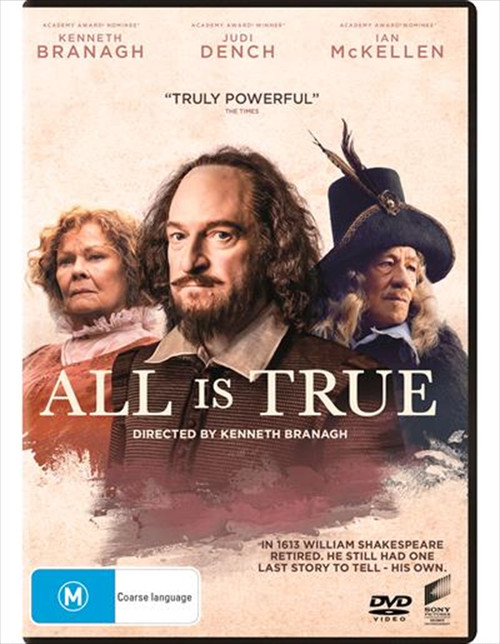 "All is True" stars Kenneth Branagh, recognisable here only by his voice and the hint of wry resignation that shades so many of his performances.

"What was Shakespeare like?", with a scenario focusing on the playwright’s last three years. The Globe theatre has been consumed by fire, bringing his life in London to an end, and he has returned to his house in Stratford-upon-Avon to rejoin his wife, Anne (Judi Dench) and his two grown-up daughters.Will's daughter Judith (Australian actress Kathryn Wilder) is also disturbed by her father’s grief: Hamnet was her twin and she’s sure that her father has always felt that the wrong twin died.

On hearing that the Earl of Southampton (Ian McKellen) is coming to visit, Shakespeare dashes around the house, joyfully spreading the news, oblivious to Anne’s fury: she’s already been humiliated by the suggestion that Will's passion for the Earl inspired his sonnets; now she has to endure the man’s presence under her roof. The visit itself is the film’s glittering centrepiece, with McKellen, in long ringlets and feathered hat, pulling rank in a jovially callous way. It’s all done in a single conversation. He’s attempting to seduce Will into writing again and so fulsome is his praise that Will dares to declare his affection, only to be squashed by the old snob’s derision. Much as he admires Will as a writer, his station in life makes it impossible for him to extend his admiration to him as a man. It’s a superbly managed scene and the coup de grace is administered with the sunniest and most eloquent of smiles. It’s the kind of smile that says: if you’d thought for a moment, you’d have realised that you were about to make a complete fool of yourself. However, I excuse you. We won’t speak of this again.

The script is by Ben Elton, better known for seeing the hilarious side of the Shakespearean age in  the TV serials Blackadder and Upstart Crow. Here, he straightens his face and quietens his urge to lampoon. Directed by Branagh, the film is only lightly dusted with dry humour. Working from what little is known of Shakespeare’s life, Elton has crafted a plausible imagining of the yawning gaps in the record. The main game centres on the gradual thaw that takes place between Will and the sceptical Anne, still brooding on her husband’s years of indifference." SMH

All that Jazz DVD

Will & Grace : All 9 Seasons (including the Revival) DVD

All About Eve DVD