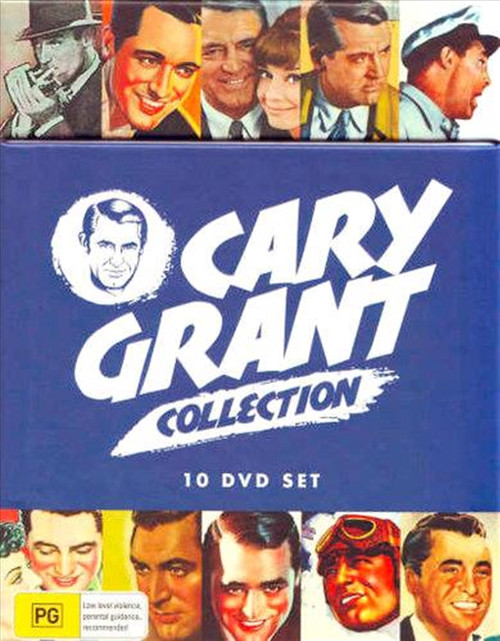 Charming, sophisticated and debonair, Cary Grant is one of the most popular and enduring Hollywood actors ever to grace the silver screen. His illustrious career spanned over 3 decades and included some of the most unforgettable roles in motion picture history. The Cary Grant Collection features 10 films released between 1932 and 1964, the collection showcases the actors comedic timing and dramatic skills in a variety of roles along side Hollywood legends such as Audrey Hepburn, Marlene Dietrich, Sylvia Sidney, Walter Mathau and Fredric March. The collection includes films such as Charade, Ladies Should Listen, Thirty Day Princess and Blonde Venus.

THIRTY DAY PRINCESS: Everything is not royal, when a young American, substitutes for a visiting princess confined with the mumps.

WEDDING PRESENT: After unwittingly destroying his engagement through a practical joke, a reporter tries to recapture his ex-fiancee's love.

THE EAGLE AND THE HAWK: Englishman Jerry Young (Fredric March) is an expert World War I fighter pilot. Lately, Jerry has been under serious mental stress; he cannot seem to forget the deaths of his fellow soldiers, enemies and compatriots alike. Jerry is given time off to recuperate in London. He has a brief romance that offers him respite; however, he soon must return to duty. After learning that two friends (Cary Grant, Jack Oakie) have been in a devastating plane wreck, Jerry is pushed over the edge of sanity.

LADIES SHOULD LISTEN: A telephone operator in love with one of her clients tries to manage his affairs but only manages to complicate them.

FATHER GOOSE: On an island in the South Seas, Walter Eckland (Cary Grant) lives a quiet life. That changes when he's persuaded to serve as a lookout for the Allies, watching for enemy ships. Eckland, whose main interest is drinking, proves bad at his job and is sent to fetch a replacement from another island. Instead he finds a stranded teacher, Catherine (Leslie Caron), and her pupils. After Eckland brings the group to his island, romantic sparks fly between the prim schoolmistress and the slovenly loner.

CHARADE: After Regina Lampert (Audrey Hepburn) falls for the dashing Peter Joshua (Cary Grant) on a skiing holiday in the French Alps, she discovers upon her return to Paris that her husband has been murdered. Soon, she and Peter are giving chase to three of her late husband's World War II cronies, Tex (James Coburn), Scobie (George Kennedy) and Gideon (Ned Glass), who are after a quarter of a million dollars the quartet stole while behind enemy lines. But why does Peter keep changing his name?

THE AWFUL TRUTH: Jerry (Cary Grant) and Lucy (Irene Dunne) are a married couple who doubt each other's fidelity: Jerry suspects Lucy and her music teacher (Alexander D'Arcy) of spending an evening together, and Lucy is convinced Jerry lied about a business trip. When the jealous pair file for divorce, both rush into new relationships, but quickly realize their love never died. The soon-to-be-divorced husband and wife then both scramble to spoil each other's chances for newfound romance.

THE TALK OF THE TOWN: Leopold Dilg (Cary Grant), who was wrongfully convicted of arson, manages to escape from prison. While on the lam, he finds the home of Nora Shelley (Jean Arthur), an old friend from school for whom he harbours a secret affection. Nora believes in Dilg's innocence and lets him pose as her landscaper; meanwhile, Professor Lightcap (Ronald Colman), a legal expert, has just begun renting a room in Nora's home. Lightcap, like Dilg, also has eyes for Nora, leading to a series of comic misadventures.